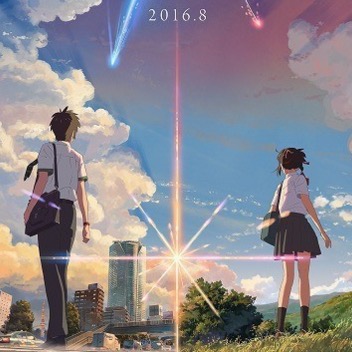 The latest anime film from acclaimed director Makoto Shinkai (Voices of a Distant Star, 5 Centimeters per Second, The Garden of Words) is Your Name. (Kimi no Na wa.). It’s coming to Japanese theaters in August 2016, and a new preview recently made its way online.

In addition to direction by Shinkai, Your Name. has character designs by Masayoshi Tanaka (anohana) and animation direction by Masashi Ando (Spirited Away, Paprika). The tagline for this “story of miracles and love” is “I am searching for you, whom I have never met yet,” which certainly sounds like a very Shinkai tagline.

Ryunosuke Kamiki (Markl in Howl’s Moving Castle) plays Taki Tachibana, a high schooler living and working part-time in Tokyo who has a dream in which he is a female high school student, and Mone Kamishiraishi (Kanada in the live-action Chihayafuru) plays Mitsuha Miyamizu, who laments her life in a confined rural town and has a dream in which she is a young man. What could be connecting these two despite the fact that they live so far apart and have never met one another?