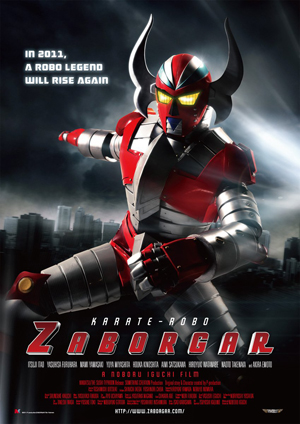 I saw crazier movies at New York Asian Film Festival than Karate-Robo Zaborgar, like The Story of Ricky/Riki-Oh. I saw better movies at NYAFF, like Milocrorze: A Love Story. However, I did not see any movie that felt more specifically made for me. Zaborgar is a loving tribute to a relatively unknown Japanese superhero TV show from the ’70s, done with a conscious wink.

I was a little cautious coming into this film on account of the director: while Machine Girl director Noboru Iguchi’s splatter action movies can be a lot of fun, his work often crosses into overindulgence or outright fetishism. My concern was wholly unwarranted: Iguchi has reined himself in for this film, and Zaborgar is all the better for it.

This isn’t to say that the film isn’t completely mad: it is, after all, about a karate master and his brother Zaborgar, who happens to be a motorcycle that transforms into a robot. That’s just the starting point. The karate master and the motorcycle robot are up against an organization called Sigma, whose weapons include the dreaded Bulldog Truck and a team of deadly cyborg girls who kill with football.

The first half of the movie (helpfully given a genre-standard cheesy title) drops us in on the adventures of Yutaka Daimon in his 20s. After a pitch-perfect opening credits sequence—with Masato Shimon’s theme song, Triple Flying Dragon Kicks, and a camera that authentically just can’t get a clean freeze-frame—something starts to feel really weird about Daimon. As he clenches his fist and yells “I’ll never forgive you!” into the sky over and over again, we’re immediately informed that “something is wrong with this guy”. 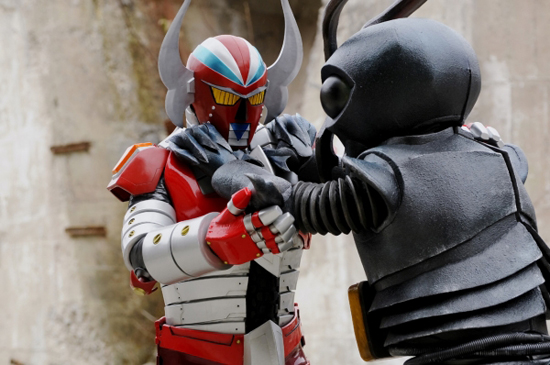 Something is in fact wrong with Yutaka Daimon (Yasuhisa Furuhara, who’s been a Red Ranger before): he’s a Japanese superhero from the ’70s. Those guys are nuts, and the first chapter of the film plays his eccentricity to the fullest spoof effect. And, indeed, the best thing Iguchi does in the movie is make Daimon feel a little more human—his hilariously traumatic childhood, his cartoonishly unfit father—and put his character though some change.

Some change. 25 years after his original exploits, the film returns to Daimon in late middle age (Itsuji Itao). He’s been fired from the secret police, driving a car for the scumbag politician he protected as a hero, and diabetic from eating too many of his beloved cream puffs. Even so, he still rocks his ’70s style: jeans (“but they’re so comfortable!”), a denim jacket, and the motorcycle helmet he uses to issue commands to Zaborgar, which he continues to wear despite a falling out between them. If the movie’s about anything, it’s about this washed-up loser picking himself up, working things out and becoming a hero again. 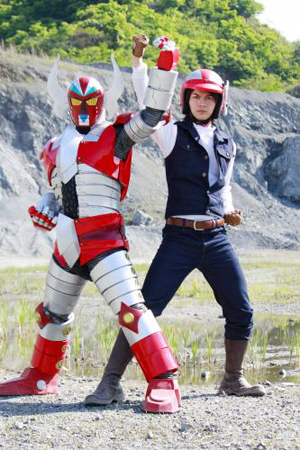 But don’t worry, kids, in true superhero style Daimon finds himself by beating the hell out of everything. All the costumes and effects work is credited to Iguchi, too, and he clearly has a bigger budget than in previous efforts. CG is cleaner, monster suits look great, and the oddball action is a joy to watch. Iguchi’s personal favorite theme—cute girls with bizarre, violent body modifications—makes it in, but the splatter is significantly toned down from his gorefests. Perhaps this was why New York Asian Film Fest’s attendance for this one was low enough that the presenters actually expressed their disappointment before the show.

Of course, “toned-down” for Iguchi still includes, among other things, a decapitation and arterial spray bursting from a crushed throat. Other deadly hazards include Diarrhea Robo, a large number of Mazinger Z-style breast missiles, and, for that matter, dragons (you know they’re dragons because they say “DORAGOOON”) that emerge from a woman’s bikini. But, really, it’s a family drama.

And so, after listing such features, we must conclude that Karate-Robo Zaborgar has everything. It’s not some “bad movie” which happens to entertain despite itself: it’s a damn good movie—both viciously funny and goofily warm-hearted—and on top of that it’s got a samurai robot that kisses people and sucks their faces off!