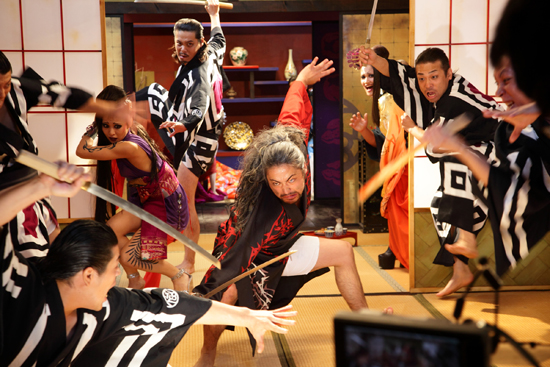 Yoshimasa Ishibashi said during his Q&A after the New York Asian Film Fest showing of Milocrorze: A Love Story that the film was a statement for Japanese boys (who aren’t culturally encouraged to act very romantically); an encouragement to surrender themselves to a passionate romance at least once in their life. The film is not a conventional story—it’s not even a conventional narrative—and with its purposeful disregard for continuity, it encourages the viewer to sit back and let everything wash over them. Milocrorze is less a story and more a show about love, perhaps a visually stunning infomercial for it.

The film is split into three distinct pieces, which criss-cross and may or may not have anything to do with each other. The first, the Day-Glo children’s book story of little Ovreneli Vreneligare (named so that we can hear the film’s narrator speak that strange name over and over again), is very stylistically reminiscent of Ishibashi’s only claim to fame in the English-speaking world, the bizarre (but not this bizarre) mannequin comedy Oh Mikey! (The Fuccons).

And then, as quickly as before, we move to the third protagonist (all of whom, aside from young Ovreneli, are played by the very impressive Takayuki Yamada), and he’s a warrior. Tamon is on a quest for his kidnapped love Yuri (as a side note, her cruel ex-boyfriend is named Shin and I’m convinced Ishibashi is riffing on Fist of the North Star in this storyline), and journeys through time and space to wind up in a post-apocalyptic but strangely old-fashioned Japanese mega-mart of vice.

Ishibashi does all his time-shifts here, moving from shot to shot between Kumagai Besson’s ’60s, a Wild West saloon, feudal Japan, the current day and the far future at a whim. Sometimes the eras contradict themselves in the same scene, like Tamon paying for flowers in the present day with the ryo coins one would use in the age of the samurai. It’s as though the director is actively discouraging you from keeping track of the film, insisting that you simply get caught up in its dizzy, daydream feeling. A four-minute, time-warped battle between Tamon and everybody else—one which isn’t terribly important and which is also the reason the director says he made the film at all—is perhaps the film’s ultimate “just run with it!” moment.

After two larger-than-life love stories with two very different but equally unlivable masculine ideals, the film comes back to the more ordinary Mr. Vreneligare, now fully grown and with a literal hole where his heart used to be, for a final segment. If we think in terms of the plot, there’s very little connection between the segments, but thematically these three stories feel like the thoughts of a confused young man working his way through the idea of romantic love. The film ends on a note of acceptance: of the risk involved in following love, the terrible heartache that comes when it’s lost, and the hopeful, bittersweet realization that despite the pain, one was probably better off having decided to love. And so it is with Milocrorze: sit down and let this movie work. You won’t regret it.