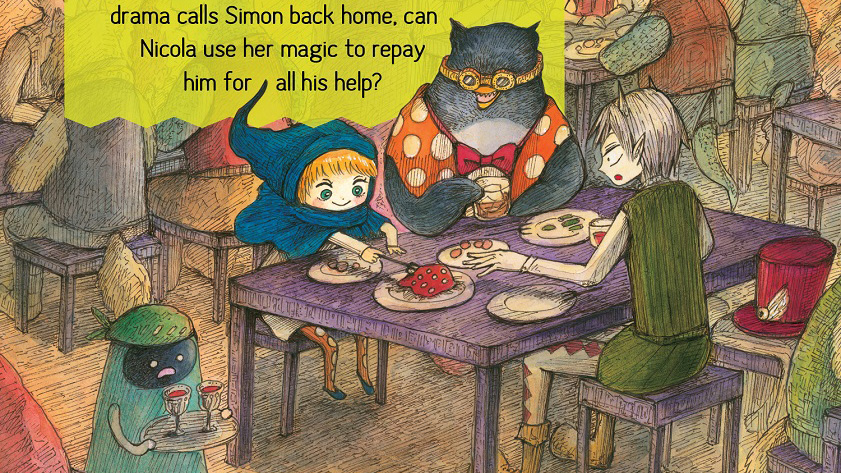 Nicola Traveling Around The Demons’ World is a storybook fantasy about a little girl who, for one reason or another, has been transported to a land full of monsters. Call it a fairy tale, call it an adventure, just don’t call it isekai because it’s the farthest thing from a conventional portal fantasy. A rare all-ages title from Seven Seas, which has built its brand around alternative, adult-oriented fare, Nicola deserves to be read by both kids and grown-ups. 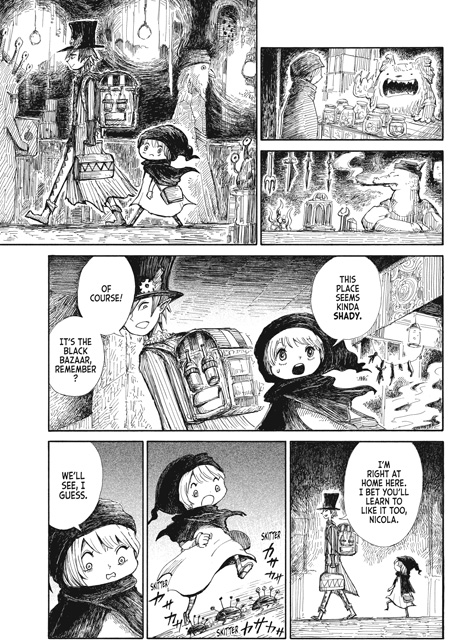 Together with traveling salesman Simon, Nicola and her devil companion spend their days moving from city to city, selling unusual wares and camping in the woods along the way. Simon’s charge doesn’t always know how to behave, and he tries to be kind and patient but doesn’t know a lot about kids. The demon world is populated with monsters who have their own cultures, beliefs, and superstitions, just like humans. Demon civilization has a lot of parallels to human society, but everything is inverted just enough that Nicola fumbles around trying to fit in. Humans aren’t allowed in the demon world, but, as we gradually learn, Nicola might not be an average human.

While younger readers will latch onto the goofy, mischievous protagonist, older readers will be impressed by the imaginative, densely populated demon world. From dusty hotels to busy pubs, every panel is crammed with detail. The fairy-tale simplicity of the story is complemented by the art, reminiscent of illustrations in vintage storybooks. Heavy on ink and scratchy hard lines, Nicola balances manga style with influences from classical illustrators without having to make concessions in either direction. Readers used to zipping through manga would do well to slow down and savor the carefully crafted visual atmosphere.

The idea of subverting themes and expectations in children’s stories is far from new, but when it’s done right, the result is a story that is both wondrous and thoughtful. The demon world seems unpleasant, but that’s only from a human perspective, and the point of the manga is to see things through another set of eyes. Nicola is heartfelt and lively, and its messages are simple and powerful without falling into the trap of heavy-handed moralizing. Recommended.