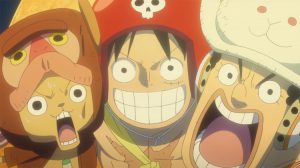 Eiichiro Oda‘s One Piece manga already celebrated its 20th anniversary, and now it’s almost the anime adaptation’s turn. As of 2019, Toei Animation’s TV version of Luffy and co.’s exploits will have been on the air for two decades, so naturally it’s time for another One Piece anime film.

There aren’t any major details about the film yet, but the latest theatrical outing has been lined up for a summer 2019 premiere in Japan. According to the official One Piece site, this movie will feature the start of a new adventure on an “unprecedented scale.”

In the meantime, feel free to imagine what that means in terms of Oda’s long-running series.