New Manga From the Creator of Gantz 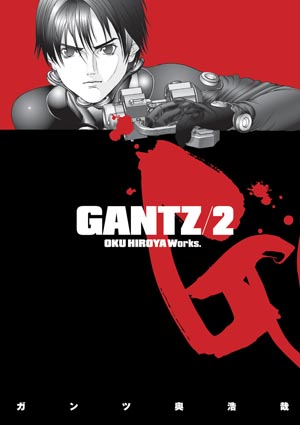 2013 was a tumultuous year for the Japanese manga industry. Why, according to the ebookjapan.com newsletter I just got in my inbox, manga sales year-to-year in Japan are down to just 3/5ths of what they were during their peak way back in 1996. Something you may have noticed is the large number of long-running manga series that ended their runs during 2013 due to flagging interest and a need to find new hits. Initial D, Soul Eater, Rozen Maiden, Evangelion, Gantz…

…Wait, Gantz ended? I figured that was going to run the rest of my life!

Right… okay. I think I’m going to be all right. Things change. So what’s Gantz’s author, Hiroya Oku, going to be working on next? 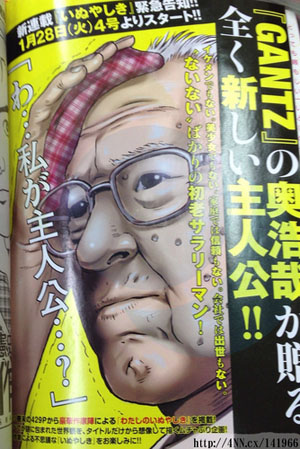 – revealed the first details on Oku’s next series, which is going to be called Inu Yashiki (which translates to “Dog Mansion,” while also being hilariously close to InuYasha to casual observers).

Dog Mansion is going to be about… well, we don’t quite know that just yet, but we do know that the main character is going to be an aging salaryman who’s having a rough time of it at home, at work, and generally finding his life turning up a whole lot of “nothing.”

That’s all the details in the teaser, but the series will begin in the January 28 edition of Evening, so interested readers won’t have to wait long to find out more.

Obviously, this doesn’t sound like it’s going to be the same kind of story Gantz was — any serious fans of that series curious about what this new one’s going to be about?