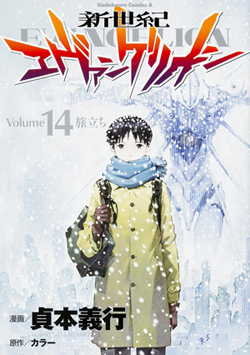 Sadamoto of course, is best known for his character designs for the original anime, along with designs for works such as Gainax’s Nadia: The Secret of Blue Water and FLCL, and director Mamoru Hosoda’s film Summer Wars.

With the wrap up of the constantly delayed manga series, it’s almost as if Sadamoto worked extra hard to just barely slide his way to the finish line in time for 2015, which is the year the story of Evangelion takes place.

The Evangelion manga has always been an interesting companion piece to Gainax’s 1995 television series, providing an alternative look at the acclaimed anime series. Initially based off of original concepts and scripts from when the show was still in development (the first issue ran 10 months before the series aired), the manga provided a different take from the get-go, with a seemingly more assertive take of protagonist Shinji Ikari (who has brown eyes here, unlike his blue-eyed anime counterpart), a more human Rei Ayanami, and a much more fleshed out version of Kaworu Nagisa.

Other characters are also given more extensive backstories, including a more thorough look at the relationship between Shinji’s mother, Yui, and Eva Unit 01, and flashbacks of Ryoji Kaji’s upbringing. Some characters even meet different fates from their television versions.

Volume 14 begins roughly around the second half of the original anime’s concluding film, The End of Evangelion. Shinji in Eva Unit 01 is in outer space, being absorbed into the enormous white Rei towering over the Earth as the Human Instrumentality Project is in full swing. The major beats of the film are intact, showcasing Sadamoto’s beautiful recreations of scenes from the film. Perhaps easily one of the bigger pet peeves of a manga-to-anime or vice versa adaptation is the lack of consistency of designs and artwork from page to screen. With Evangelion you’ll find no such problem, and I wish there were more manga adaptations drawn by the original character designers. It’s easy to forgive Sadamoto for taking such a long time to finish the manga after seeing these panels. 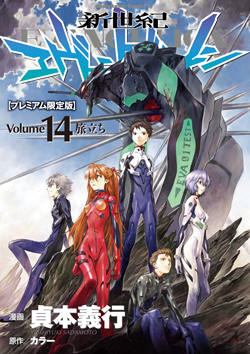 One of the key points of The End of Evangelion was the live action sequence at the climax of the film, through which Shinji seemingly comes to term with the nature of humanity and decides to reject the Human Instrumentality Project. While there are no panels featuring black and white photographs of Tokyo, nor are there shots of a movie theater audience, Sadamoto uses two page spreads and flashbacks to convey Shinji’s transcendence and coming to terms with his own existence. While there isn’t the same visceral thrill as seeing the images on screen, Sadamoto uses the manga format to create a clean narrative that works.

The manga ends with a post-Third Impact chapter, showing a seemingly reset world where the Human Instrumentality Project happened, but no one remembers it. As Shinji leaves for Tokyo (the real one, not Tokyo-3), he runs into the other characters, getting a vague feeling of déjà vu, but not knowing exactly for sure who they are. It’s a nice middle ground between the alternate reality presented in episode 26 of the TV series and The End of Evangelion, and it’s one that fans probably wouldn’t have sent death threats to the folks at Gainax over, had the studio done something similar back in 1996.

Another interesting addition to the franchise: snow. As fans know, the Second Impact shifted the Earth’s climate, and Japan has now become the land of the never-ending summer. However, as teased on the cover of volume 14, the newly reset universe at the end of the story takes place in a white, wintery wonderland. The imagery of snow in Evangelion is something we’ve never really seen before, and the fact that similar imagery was featured in the “Until You Come To Me” short released last month seems to suggest that this won’t be the last time we see Shinji and his friends against a snowy backdrop.

Volume 14 also contains an epilogue which features a scene with Yui and a female colleague in university back in 1998. At the end of the epilogue, it’s revealed that the colleague is actually Mari Makinami Illustorious, a character who has thus far only appeared in the new Evangelion films. Is the epilogue and the snowy imagery hints of some sort of connection between the various versions of Evangelion?

At the very least, they’re both reminders of us how much Evangelion has changed over the years, and how it’ll keep changing well beyond 2015. 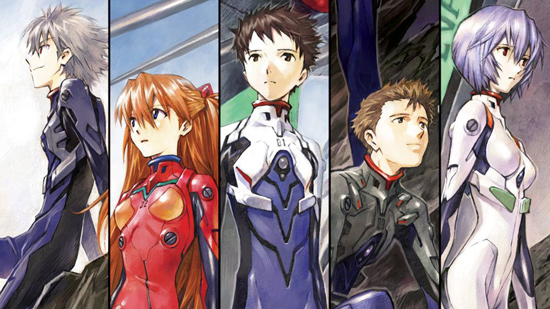