(Full disclosure: I was a backer for the Kickstarters for Masaaki Yuasa’s Kick-Heart as well as for the original English language Blu-ray Premium Edition release of Mind Game that was done out of the UK. Both are unrelated to this US release by GKIDS Films.)

I still can’t get over how one of the most popular and beloved anime titles of 2018 is one from Masaaki Yuasa of all people. For those wowed by the aesthetic of DEVILMAN Crybaby who are curious to see how much further their mind can be blown, it doesn’t get much more surreal than 2004’s Mind Game, produced by the notoriously unconventional Studio 4°C (Amazing Nuts!, Genius Party, Detroit Metal City). It’s this film above all others that solidified Masaaki Yuasa’s international infamy among general animation enthusiasts, if not anime otaku specifically, due to its rapid utilization of so many varied types of animation methods and art styles.

Mind Game is the definition of a “cult classic.” With its alternation between rotoscoping, pencil sketch-like animation, watercolors, CGI, live-action, papercraft, and so on it doesn’t really look like any other modern Japanese animation you’ve ever seen before, save perhaps for other titles Yuasa worked on since. (Once upon a time, certain people might have described its aesthetic as “superflat” but we don’t use such profanities.) It’s not a movie that makes “safe bets,” which means there’s a very high chance you’ll either dislike it intensely … or consider it among your all-time favorites. You are very unlikely to have a lukewarm response to Mind Game.

The plot is similarly surreal, to the point that merely describing what sequentially happens fails to convey what makes the film so special. Despite its nontraditional approach to narrative, film structure, and basically everything, I suppose you could attempt to divide Mind Game into two distinct halves. The first half centers around the fact that Nishi, a young adult slacker who never really did much with himself, gets reunited with Myon, his now outrageously busty childhood sweetheart … only for an altercation with the yakuza to culminate with Nishi getting a pistol stuck up his butt and the trigger pulled, killing him spectacularly.

That would typically be the end, but a purgatorial meeting with God (whose voice and image continually changes; my personal favorite is a live-action photo of a goldfish with drawn-on eyelashes and a human body holding a cigarette) causes the clock to rewind and Nishi to be resurrected, with the vow to live true to himself without restraint. A daring turnabout of fate ensues, followed by a wild car chase that culminates in Nishi, Myon, and Myon’s outrageously UN-busty sister Yang being … swallowed up by an impossibly colossal giant whale! Then the majority of the second half of the movie is them living inside the whale, free of societal restraint and cares, along with an old man they encounter who’s spent decades in there, before resolving to make a daring breakout. “Your life is the result of your own decisions” after all. 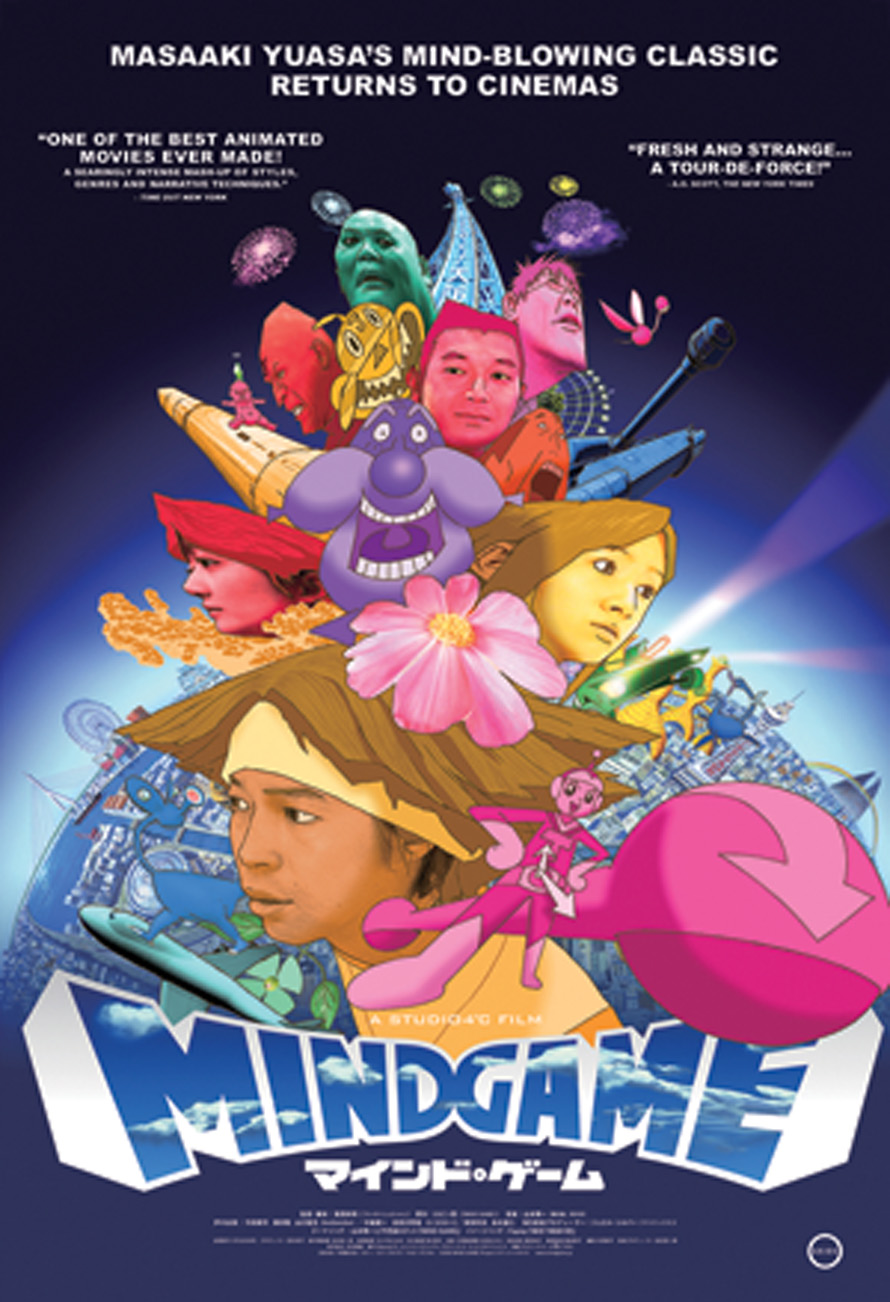 Some may call Mind Game “style over substance,” but I say style IS substance. It may not have the strong religious and LGBT thematic elements that drew many to DEVILMAN Crybaby, but Mind Game is also quite heavily laden with violence, strong language, adult situations, and sexuality to go along with its psychedelic visual palette. Its music direction is similarly accomplished, courtesy of Shinichiro Watanabe (Cowboy Bebop, Space Dandy), with noted anime audio impresario Yoko Kanno on piano. Despite the contributions of such stellar talent (and several others whom I must omit for space considerations) and being acknowledged as an outstanding work by the late Satoshi Kon (Paranoia Agent, Perfect Blue), Mind Game was predictably commercially unsuccessful at the time of release. But perhaps now, in 2018, fans are ready to give it a chance. If you’re unsure whether to take the DVD/Blu-ray plunge, the film is streaming courtesy of Crunchyroll’s more catch-all streaming site, VRV.