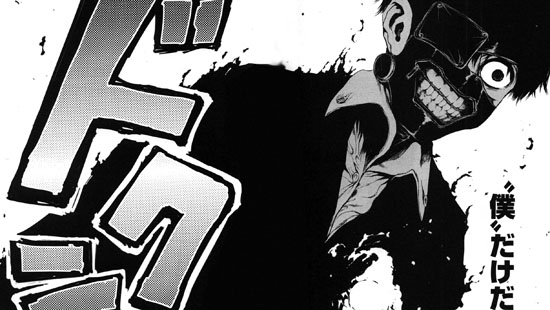 Ken Kaneki is thrilled when he gets the chance to go on a date with Rize, the girl he’s been mooning over from a coffee bar he haunts with his friend. The date goes sour when she tries to eat him. She is a ghoul, a creature that appears human but feeds on the flesh of dead people. Ghouls are stronger, faster, and deadlier than anything Kaneki can wrap his head around … which is bad for him, because after receiving a ghoul’s organs in a organ transplant he starts to become one himself.

The setup of Tokyo Ghoul isn’t so different from a vampire book, but using ghouls, an underutilized monster, is a nice spin. The authorities know about ghouls—TV hosts do talk shows about how dangerous they are—but telling a ghoul from a human isn’t easy. The only giveaway is their diet: ghouls can’t eat human food and can’t drink human beverages, except coffee. When they’re ready to kill, they release tentacle-like organs called kagune which they use to kill their prey. As he transforms, Kaneki spends much of Book 1 fighting his impulses, suffering rabid hunger for human flesh, and trying not to kill anyone. And it pretty much goes downhill from there.

Don’t let pretty screen shots from the anime fool you; Ishida’s art is rough and sketchy, even ugly at times. The characters aren’t always in proportion and the older characters look plain weird. The fight scenes are hard to follow which is a shame because there are several. 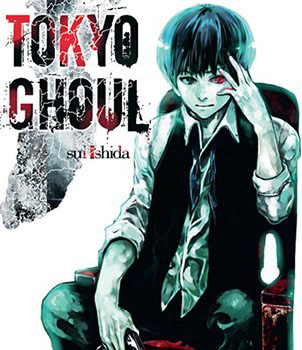 But somehow absolutely none of that matters. The story—Kaneki’s struggle with his new state of being along with the brutality of ghoul society—is what pulls the story into deep, dark waters full of sharks.

Tokyo Ghoul is a straight up horror manga. Or psychological thriller. Whatever you call it, Tokyo Ghoul is made of pain. Nothing nice, funny, or cute happens here: the only “kindness” Kaneki is offered is the opportunity to feed without killing his own prey. But that still amounts to getting frozen human meat from the coffee shop. This is a great series for anyone looking for unrelenting existential dread. Which is a weird recommendation, but a recommendation nonetheless. Recommended.