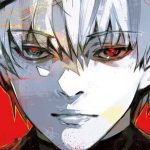 What’s going on with Tokyo Ghoul? While we wait for this month’s English release of the live-action movie and the October 17 North American launch of the Tokyo Ghoul:re manga, there’s even more to keep an eye out for in the pages of Young Jump.

There aren’t any real hints at the moment, but Young Jump magazine—which serves as the home for Sui Ishida’s manga—has an important announcement planned along with Tokyo Ghoul:re. Feel free to speculate for a few days, because the reveal is set for October 12, just a week prior to the Japanese launch of Tokyo Ghoul:re volume 13.