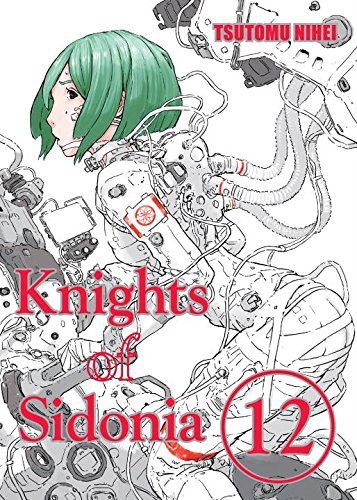 Tsutomu Nihei’s Knights of Sidonia manga has done a pretty commendable job of staying consistent throughout its run, and volume 12 does nothing to sway that. In fact, I’d say 12 was one of the most enjoyable volumes of late, mixing in a dash of relative lightheartedness in the midst of an otherwise tragic situation.

The volume opens in a big way, with the deployment of a new state-of-the-art Tazugane class vessel that pretty much blows the socks off everyone who sees it in action. A massive wave of hope overtakes all as the ship rockets off and proves its worth in the seemingly endless battle against the Gauna. Meanwhile… someone’s peeping on photosynthesis! Yep, a mystery creep is getting his or her jollies off playing Porky’s, and even our lead Nagate Tanikaze isn’t out of the question as far as suspects go.

That might sound kind of fun, but the story takes a turn for the tragic during a showdown with an amorphous Gauna that ends with Garde pilots swallowed whole. What happens as a result is a harsh lesson, but also a reminder of how fantastic Nihei’s artwork can be. While Sidonia occasionally comes off a bit rushed—especially in some of the character close-ups that pop up from panel to panel that look more like roughs than final inks—it’s still a nice contrast to some of the more robotic and overcooked manga out there.

Nihei’s lines look particularly gorgeous during the scenes that take place within Gauna. Some of the techniques therein remind me of Miyazaki’s work in Nausicaä of the Valley of the Wind; spore-like and oozing a thick yet invisible miasma. There’s a special kind of life to the art that puts it in a different league than its more clinical sci-fi counterparts.

Knights of Sidonia is holding up well, and still comes highly recommended. If you found yourself sucked into the anime and haven’t given the manga a chance yet, what are you waiting for?

Japanese Fans Rank The Anime Couples They Want to Split Up
Gangsta. Anime Gets a 1.5 Promo