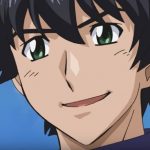 MAJOR 2nd is the followup to Takuya Mitsuda’s baseball manga MAJOR, and a TV anime is on the way this April. Ahead of that we have the first promo, which is here to introduce some of the main staff and cast members.

As for the cast, Natsumi Fujiwara voices protagonist Daigo and Koutaro Nishiyama voices his partner Hikaru Sato. Showtaro Morikubo and Masakazu Morita are reprising their roles as Goro Shigeno and Toshiya Sato, respectively.