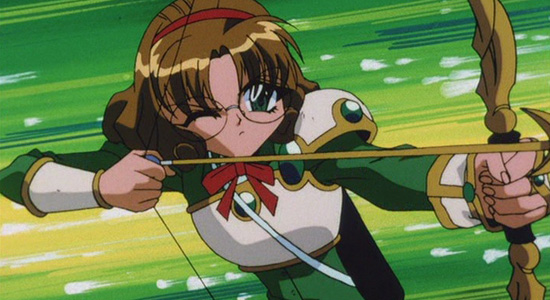 When it comes to unconventional dark fantasy tales, the ladies of CLAMP have proven themselves to be excellent storytellers. From X/1999 to XxxHolic and various works in between, their stories have often featured lavishly beautiful characters facing horrible situations in supernatural settings. Magic Knight Rayearth is a prime example of this.

Starting in Tokyo during a museum field trip, three female junior high students are suddenly whisked away into a fantastic realm with floating islands and odd creatures. The girls, named Hikaru Shidou, Umi Ryuuzaki and Fuu Houiuji, are met by Master Mage Clef. He explains they’re trapped in a world called Cephiro, which needs the three Legendary Magic Knights to save it. Cephiro has beings whose strong wills can make miracles, or allow monsters to be created through their darkest fears. 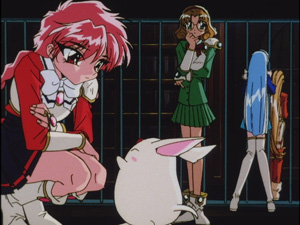 Much has to do with a being called the Pilar, who keeps Cephiro existing through strength of sheer will. The current one, Princess Emeraude, has been imprisoned by her high priest Zagato. So the girls have been called psychically by Emeraude to awaken three powerful Rune Gods (large mecha) to aid their quest to save the princess and the realm. The ladies initially refuse, saying the people of Cephiro should solve their own problems, but Clef notes Zagato is virtually unbeatable without their help and there’s no way home without his defeat.

Like I said, CLAMP (whose name means potato) have proven themselves the masters of dark fantasy, and their story here is excellently done. Rayearth itself initially feels like lighter fare (and is in fact aimed at children as noted in an interview with head CLAMP writer Nanase Okawa). However, it does take a rather shocking turn in the end of the first season, which (although well-done) is a bit of a downer, all things considered. Okawa also noted that the Rayearth manga (published in Nakayoshi magazine from ’93-’95) was meant to grow in intensity as its readers developed into womanhood, which would explain the resolution of the first season. 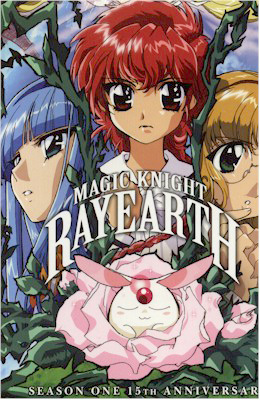 Still, the first episode rushes straight into the situation with very little focus on characterization in the outset. You have these teens who’re thrust right into a fantasy adventure. Rayearth is akin to the ’80s Dungeons & Dragons cartoon in that regard. The general tone remains somewhat lighthearted, with characters randomly alternating from chibi (super-deformed) to normal designs in an instant. The series is directed by Toshihiro Hirano (Hades Project Zeorymer, Vampire Princess Miyu), who demonstrated an affinity for guiding mecha and strong female characters through unusual situations in Fight! Iczer-1.

This remastered set is being released by Anime Works, who originally distributed Magic Knight Rayearth on VHS as well as DVD when it became the dominant entertainment medium. The difference between these two sets is night and day, as the original was apparently a straight dump from the VHS releases. The remasters have much better picture quality and better menu setup. Also, the title screens are the Japanese picture with English subs instead of an American revamp. Various interviews and extras make this an excellent release for purchasing sometime, as does the story which is well told, balancing the right mix of small doses of goofball humor, a tinge of shoujo-ai, and dark fantasy.

Even if you’re not particularly into magical girl shows, I’m definitely recommending this remastered set of Magic Knight Rayearth season 1 for an entertaining journey.