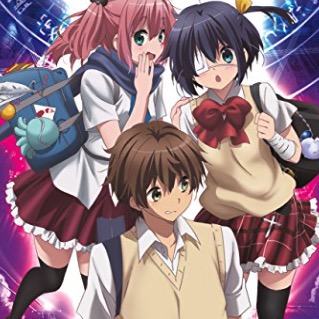 As fun as fantasies can be, it’s always possible to take them too far. Yuta Togashi knows this better than anyone, and his recently-established relationship with “Wicked Eye”-sporting Rikka Takanashi is in for a true chunibyo test as a major player from Yuta’s past returns in Love, Chunibyo & Other Delusions! Heart Throb.

The blast from the past comes in the form of Satone Shichimiya, who claims to be Yuta’s soul mate and is more loaded with chunibyo power than anyone we’ve met thus far. She even goes so far as to call herself “Sophia Ring SP Saturn VII,” and she’s more than willing to tear down the walls of Yuta’s reality if it means she can pull him back into her own personal fantasy world.

Thus Yuta finds himself in a major pickle that involves balancing his relationship with the next-level delusions of Satone, something that might best be dealt with in the realm of fantasy. Throw in Sanae—a friend of Rikka’s who is just as delusional as Satone—and you have the recipe for a series full of truly wild & crazy kids.

Continuing the adaptation of Torako’s light novel series, Love, Chunibyo & Other Delusions! Heart Throb is directed once again by Tatsuya Ishihara (Clannad, Nichijou), with Jukki Hanada (Rozen Maiden, Yozakura Quartet) returning on series composition for the Kyoto Animation production. Even if you’re not one iota as fantasy-absorbed as the series’ cast, you’ll find a delusion worth considering in