Kyousougiga offers a Wild and Touching Trip through the Looking Glass

Stop me if you’ve heard this one before: a human, a demon, and a Buddha walk into a temple … in an alternate dimension through a drawing as led by a magical priest and his anthropomorphic rabbit-wife. Wait, you’ve not yet seen the humorous, touching, and resplendent fairytale called Kyousougiga? Oh, lovers of stories and animation, come close, read a while, and discover how this anime will earn your attention and adoration.

After leaving the capital city, priest Myoue keeps to himself in a small temple in the mountains. There he makes drawings that can move on their own—a talent that entertains and frightens the children who dare to stop by as egged-on by growing rumor. On one of the walls in his small temple, there’s a city Myoue’s drawn as well as a drawing of a black rabbit. That latter, named Koto, falls in love with him and makes a deal with Buddha Locani to inhabit human form until her love is reciprocated. 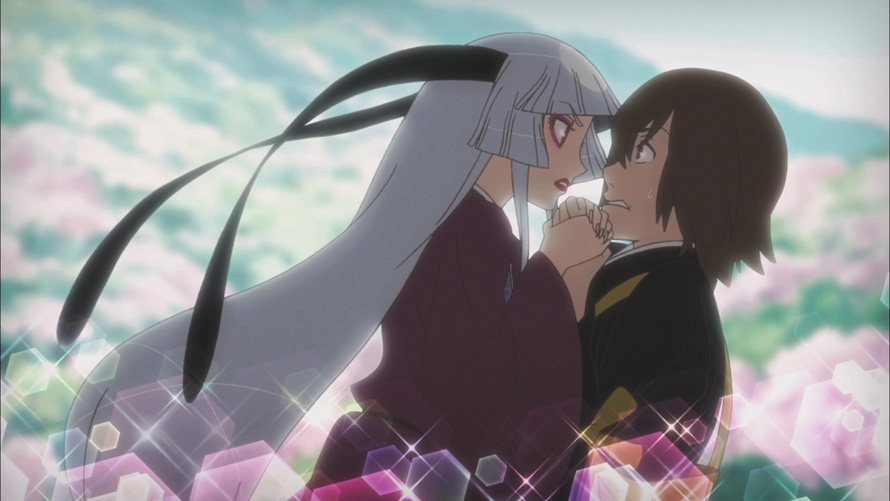 Time passes, and the reclusive Myoue comes to adore Koto as well as their adopted and drawn children. But this unnatural family attracts too much attention and disappears into the drawn city (the Looking Glass City) to escape persecution by The Shrine—a religious organization that “acts on behalf of God to maintain balance between the planes.”

The Looking Glass City is an alternate Kyoto, filled with men and monsters, where nothing breaks permanently. Myoue and Koto preside over the peaceful and happy land and give the ultimate yea or nay to any proposed changes. But since no utopia can last for long, unsettling dreams of prophesy make Myoue and Koto leave the city to their children and promise to return. The adopted Yakushimaru; his older sister, a picture-turned-demon, Yase; and another drawing-made-flesh, the studious Kurama, are left in charge of the Looking Glass City as The Counsel of Three. 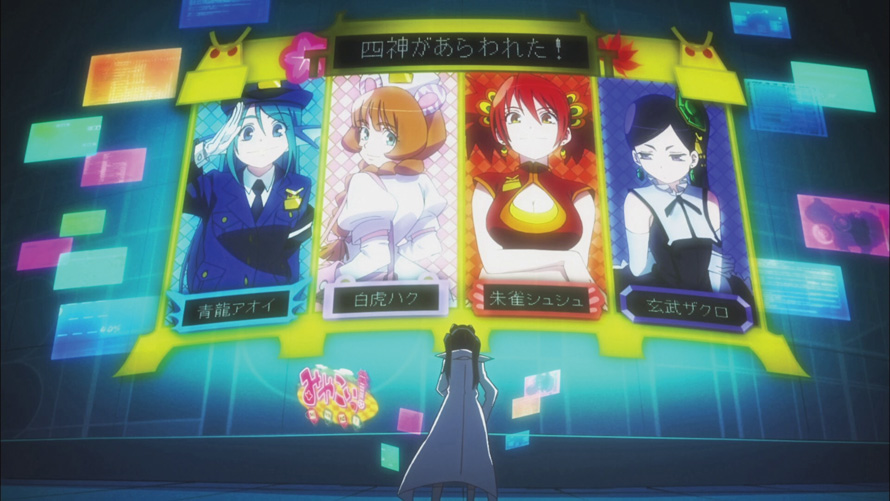 After many years of waiting for their parents to return, a strange girl, coincidentally named Koto, who has familiar red eyes and wields a magic hammer, smashes her way into the Looking Glass City looking for a black rabbit. To The Counsel of Three, the arrival of this young girl signals hope … hope for an escape to the world where their parents might be or even that the girl herself might be the very reincarnation of their father for whom they’ve been waiting.

As with any great show, multiple rewatches are encouraged; Kyousougiga, which began as an ONA (Original Net Animation) from Izumi Todo (Toei Animation staff), thrives on an essence of eccentric allure due to the directing and compositional talents of director Rie Matsumoto (Blood Blockade Battlefront) as well as color setting by Yuki Akimoto (Gatchaman Crowds, Tatami Galaxi). That is to say that this series is pretty … distractingly pretty. 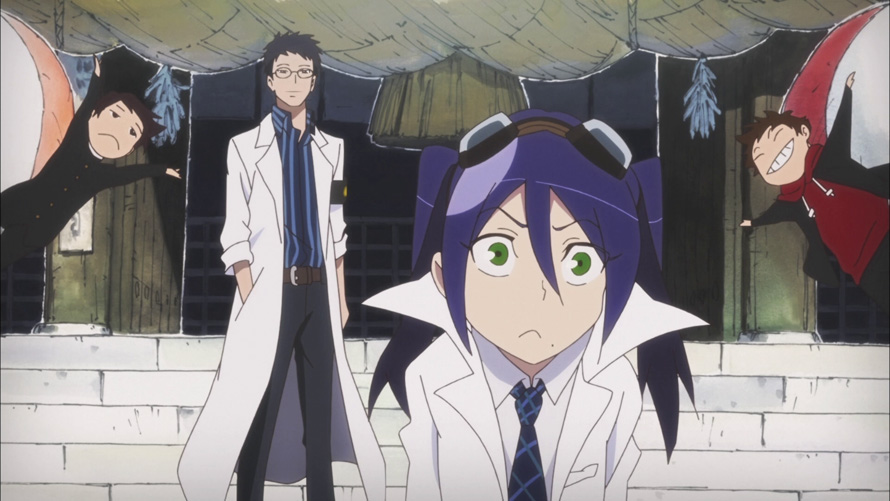 There’s so much visually engaging fare in every scene that it can be very hard to keep up with the subtitles for all the engrossing distractions exploding (sometimes literally) everywhere else on the screen. Blending photorealistic, technical, and abstract expression, the distinctive visuals and radiant colors fully and competently relay the energy of the moment within the arena of imagination in which momentums collide. The art, simply put, begs viewers to rethink normal—an absolute necessity when trying to establish another reality—while dropping details that are fun to pick up on in later viewings.

Yet for every bald man floating around in a saké saucer or rivers of garbage winding through the sky or parades of ambiguous, pulsating, hypnotizing shapes floating down main street; despite the materialization of larger-than-life, behind-the-scenes conspiracy theories-turned-flesh; ignoring giant robots with extra-dimensional bellies and the fact that all of this does not begin to scratch the surface of this show’s weirdness… there exists an undeniable humanity so basic, so fundamental, that it speaks volumes. Kyousougiga is first and foremost about family—the one you want, the one you get, and the one that grows, for better and worse, beyond your control. 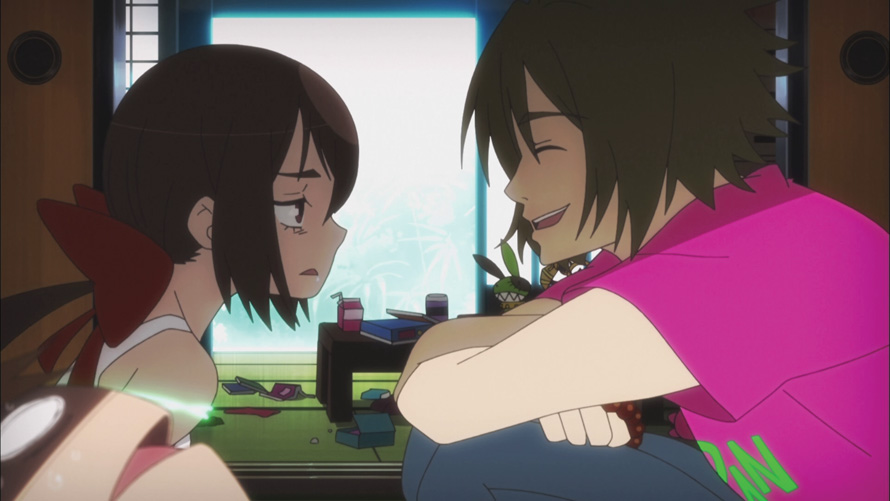 Myoue’s family includes every possible type of child, and their range of ages and temperaments provides a plethora of possibilities for emotional conflict and reconciliation between themselves and their parents. So even though some of the characters are set as twice-removed from our reality, they come to feel like any other stranger you’ve met and come to know.

Everything does not become familiar quickly or with any conformant normalcy however. Episode 0 begins with the Lewis Carroll’s epilogue to Through the Looking Glass for reasons obvious and obviouser; it’s easy to create anything in a dream world but much more difficult to have those contents coalesce into something meaningful. The series, by bobbing between past and present in both Kyoto and the Looking Glass City, gives you almost everything you need to set your mind at rest … and then pops back or forward to a different scene. While this may sound frustrating, it’s actually quite refreshing to have an anime series that keeps the mind going by begging the questions, “What’s going to happen next?” and “How did we get here?” 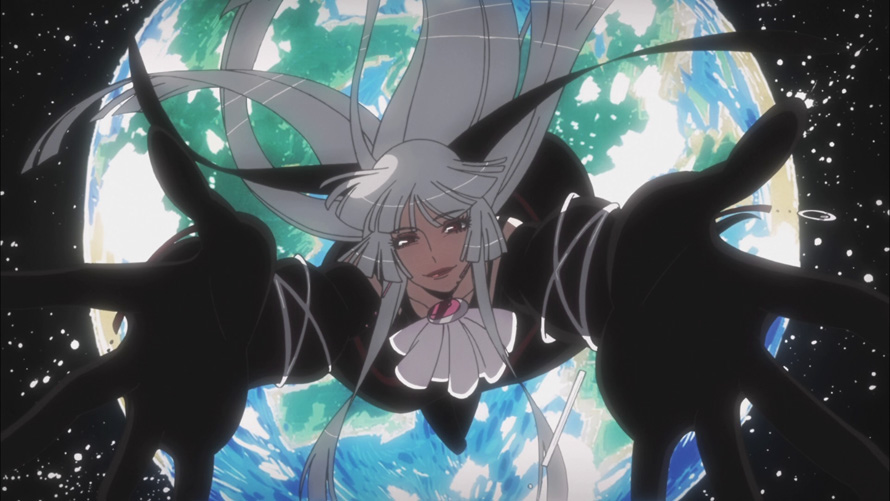 Imaginative, beautiful, exciting, and touching, Kyousougiga adopts you into its family to make you feel the pain of it being torn apart as well as the hope for reunion and reconciliation. Even after it’s watched once, subsequent viewings only add to the great impressions. It’s not infinitely re-watchable in the vein of episodic series, but pulling this one off the shelves for a committed run-through will definitely happen more than once. You’ll be surprised how much you missed, how much you remember, and how much it makes you feel.

Kyousougiga is available from Discotek Media.