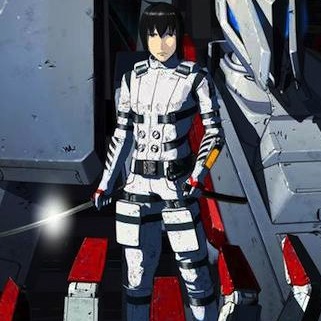 Tsutomu Nihei’s Knights of Sidonia is a unique and exciting ride in manga form, and the anime adapts the core of the series nicely. Soon you’ll be able to own the full first season along with a handful of extras with
Sentai Filmworks’ upcoming

Things are touch and go for humanity when we make contact with them in Knights of Sidonia. It’s been a thousand years since a mysterious, amorphous alien race known as Gauna destroyed the Earth, and those remaining gathered aboard the massive spaceship Sidonia to keep the fight alive. What’s even more amazing is how humans have changed over the years thanks to a combination of their circumstances and genetic engineering. Now there’s a third, population-balancing gender, and humans are able to photosynthesize like plants and reproduce through cloning.

They’ll definitely need numbers—and a strong percentage of those numbers to serve as able-bodied pilots for Sidonia’s Garde mechs—to take on the Gauna. Thankfully they have a new ace up their sleeve in the form of Nagate Tanikaze, a previously-hidden human who emerges for the first time into this strange new world as a promising Garde pilot who could help turn the tide of battle for good.

Knights of Sidonia is directed by Kobun Shizuno (Detective Conan films, Armored Core: Fort Tower Song OVA), with Sadayuki Murai (Natsume’s Book of Friends) on series composition for the POLYGON PICTURES production. The collector’s edition release packs all 12 episodes of the first season in a chipboard art box with a poster, sticker, 15 postcards, and a foil postcard. Special features include an Alternate Angle Version – Uncensored, Behind the Scenes Parts 1-2, Press Conference, Advanced Screening, Sounds of Sidonia, and clean versions of the opening and closing animation.

If you’re a fan of Knights of Sidonia, or someone planning to check the series out for the first time, look out for Sentai Filmworks’ collector’s edition,

ahead of its June 9 release.