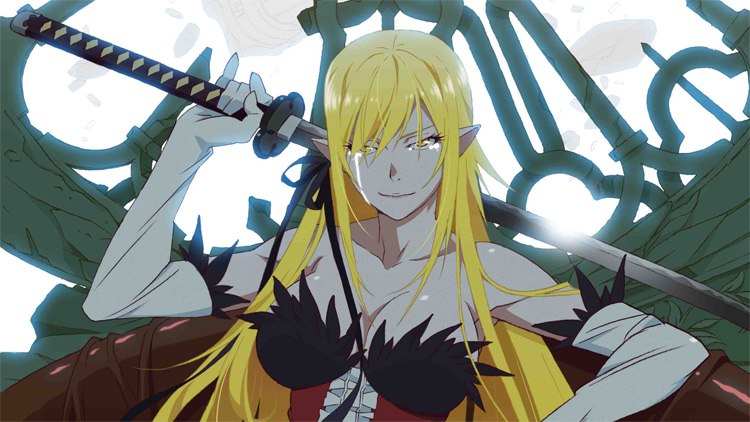 Like all good things, even stories about undying vampires must come to an end. Almost a year to the day after the release of the first film in the trilogy, Kizumonogatari Part III: Reiketsu hit theaters January 6, wrapping up director Tatsuya Oishi’s prequel to his 2009 TV series, Bakemonogatari.

It’s been a long wait for fans of the series and especially of Oishi himself: after Bakemonogatari ended, he passed the reigns of the franchise to others at Shaft while he toiled away on what became the three-part Kizumonogatari film.

But the wait was worth it. As will be no surprise to anyone who saw the first two films (reviews: pt.1, pt.2), the third is also a wildly-animated, whacked-out arty trip into the mind of Monogatari creator Nisi Oisin. In fact, it might be the best part of the trilogy. Here are a few thoughts about the latest film, and the trilogy as a whole.

Shaft’s anime in general – and the Bakemonogatari series specifically – is famed for its particular look and feel, but Kizumonogatari cranked things up to 11. The first film walked a tightrope between Jean-luc Godard, Hammer horror films and Buster Keaton and somehow, miraculously, never fell off. Weird as they might feel in other films, things like the blend (or complete lack thereof) between the computer-generated and hand-drawn elements, or the helicopter sound whenever there’s a shot from above, don’t throw us, because Oishi set up his visual and tonal rules and stuck with them throughout.

“You Can Only Do This in Animation”

…I kept thinking to myself throughout the final film, both in terms of the bloody, over-the-top final battle and the way protagonist Araragi’s inner turmoil is portrayed on-screen. I don’t believe every piece of animation needs to be something that couldn’t be expressed in another medium – but it is nice to occasionally be reminded of the awesome power of animation.

I don’t think there’s a single scene in the three films that takes place outside Araragi’s point of view, and the whole trilogy (but especially the third film) feels like a direct linkup into the protagonist’s brain. But unlike the series, narration is practically absent. Instead, our trip into Araragi’s id comes in the form of the Monogatari series’ famous title cards, facial expressions, visual gags, a great sound mix, and an impressive performance by voice actor Hiroshi Kamiya. The end result is that we don’t so much think with Araragi as feel with him, as if we’re plugged directly into his id (and with Araragi swinging between intense regret for saving the life of a vampire to an intense desire to touch classmate Hanekawa’s bosom, it’s a pretty wild trip). 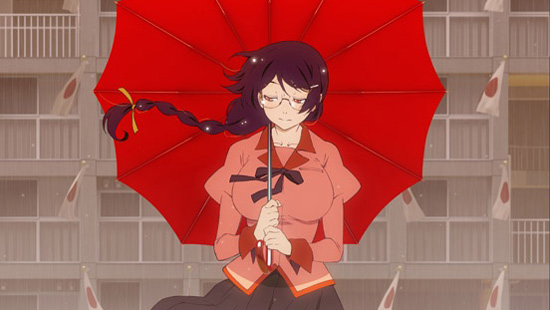 When studios split a film into two or three, it’s often in the name of narrative, but let’s get real: it’s often a pretty blatant cash grab. I’m pretty skeptical of the whole practice, not only because it costs moviegoers double, but because it kills the flow. I think Kizumonogatari was relatively successful as far as these things go, though. Without a proper beginning or ending, the second film suffered the most (as is usually the case), but each film did feel relatively self-contained – especially III, which is a full 83 minutes.

Tatsuya Oishi has been working on these films forever (it was originally scheduled to open way back in 2012). And while Kizumonogatari was worth the wait, that means Oishi’s presence has been sadly lacking in the anime world for the better part of a decade. Here’s hoping Oishi’s next work doesn’t take quite so long.

Matt Schley is Otaku USA’s man in Japan. Send him a tweet.

View all posts by Matt Schley
[Review] Wish Upon the Pleiades
Your Name. Anime Film Gets North American Premiere Date