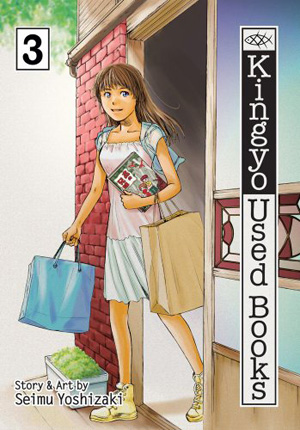 Some people really love their manga. The Kingyo Used Books series can give you an idea of why.

Kingyo Used Books is written in the form of easygoing and readable vignettes.  Each vignette has to do with a manga, and that in turn has to do with the Kingyo Used Bookstore. This is one likable bookstore, with rows and rows of manga, not to mention all the additional manga stored in its basement. People seem to always find what they need here. In one way or another, vignettes bring us back to the special bookstore.

In the first story, two people find friendship over Kazuo Umezu’s horror manga. The woman is a big fan of the mangaka and has her own Umezu Salon, and the man wants to impress her. So he lies and says he wants to read what she has, despite the fact he’s a big scaredy-cat and hates horror books. However, upon forcing himself to read Umezu’s works, he finds himself moved by them. (But they still terrify him.)

In the next story, a starving artist finds her inner child—and even a new appreciation for life—by rereading Sailor Moon. She also makes some new friends that way because other women notice what she’s reading and start talking about how much they love the series, too. From there we have a vignette about fate and wolves (yes, they go together here), making relationships over manga, journeying the world and even cooking.

And so it goes. Kingyo Used Books is a fairly simple, straightforward series. It’s serene and classy, flowing from one story to the next. Despite having no main plot or serious drama, I find it a very enjoyable series and a pleasurable read. Some of the manga discussed in the series are ones I’ve read, and some are new to me. I like seeing how the books affect people’s lives in various ways, probably because I’m a bookworm and books have affected me so much. (Whenever I see all the books lined up in the Kingyo Used Bookstore, I want to drool.)

I don’t see everyone getting into this series due to is languid nature or how—time and again—it just keeps coming back to fawning over books. However, its classy feel and artsy vignettes continue to appeal to me. This is a series I’d like to keep reading. (And I also want to check out some of the manga it talks about.)