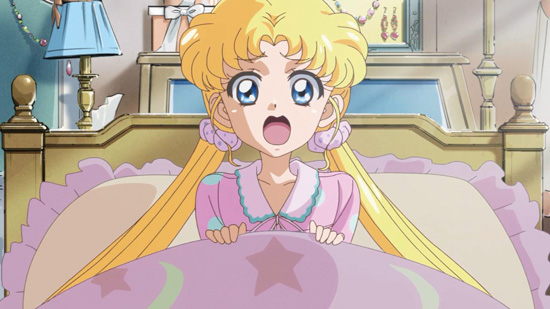 Interstellar threats are worrisome to be sure, but the most insidious of troubles are those that lie within. As the source material behind the third season of Sailor Moon Crystal, the Infinity arc in Naoko Takeuchi’s classic magical girl manga is best known for completing our solar system of Sailor Guardians, but it also introduces suspicion among their ranks,
as the line between ally and antagonist blurs. But internal struggles aren’t limited to the plot of Sailor Moon Crystal, for they have become trademark
of the production itself.

After extensive delays, the modern adaptation, advertised as a faithful representation of the original story, more so than the immensely popular 1990s series, finally debuted in 2014 and was immediately off to a rocky start. An argument can be made that, with expectations running high, it may be impossible to live up to the nostalgia held by longtime fans. However, one cannot discount the fact that Sailor Moon Crystal was initially a web anime, lacking the sponsors of a traditional television broadcast, and it grew clear that Toei Animation wasn’t affording it the budget such a beloved franchise deserves. Despite only airing fortnightly, the art was subpar, becoming the butt of jokes, and the pacing also came under fire. 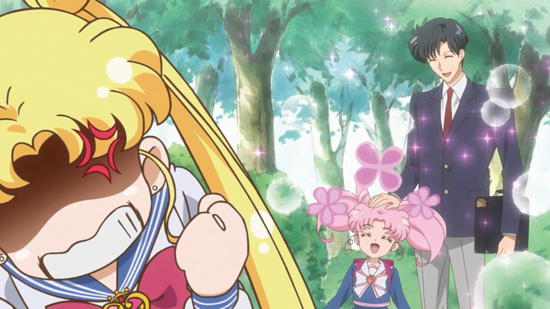 It took a year to complete the 26 episodes of the first two seasons, and they were followed by a hiatus of several months. Upon returning with Season III, Sailor Moon Crystal must’ve found its own brooch, as it transforms before our eyes. New director Chiaki Kon (Golden Time) replaces Munehisa Sakai, while character designer Akira Takahashi (Pretty Cure) fills the spot left by Yukie Sako, and within seconds, one can observe a distinct shift in aesthetic. Though completed in half the time, the visuals are markedly improved from prior seasons. The oft-lambasted 3D sequences have been cast aside, and characters sport more youthful countenances. That’s not to say Season III is exceptional, as the animation quality merely hovers about a middling level, and despite flaws, the previous cours did offer a unique style, now superseded with a stereotypical pastel moe look.

The storytelling has also been revamped, but this isn’t as readily apparent. The plot of Season III centers around the elite Mugen Academy, an institution educating gifted students from kindergarten through graduate school, and the student body abounds with stars in fields such as athletics and entertainment. Unfortunately, said students have been the victims of mysterious attacks that have them reverting into monstrous primitive creatures. As the five inner Sailor Guardians, along with Chibi-Usa, investigate both these happenings and the visions of doom that have beset them, they come to meet and befriend a few of Mugen’s enrollees—the violinist Michiru Kaioh, the racecar driver Haruka Tenoh, and Hotaru Tomoe, the sickly daughter of the academy’s founder—but the staff proves less amiable. 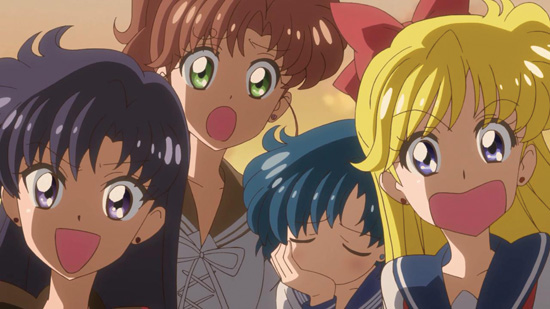 Like earlier arcs, the minimal episode count results in a familiar formula: new faces briefly take the limelight, a series of low-tier baddies are introduced and defeated, one by one, and then the upper echelon of villains are faced, leading into the final showdown. However, what differs, amusingly enough, is that, while the Infinity arc is regarded as particularly emotionally heavy, it comes off as comparatively lighter within Sailor Moon Crystal. The previous two seasons stripped the source to its core, largely forgoing humor and development of the planetary Guardians. Though not much, Season III grants screen time to these ends, and it’s all the better for it.

Those who enjoyed Sailor Moon Crystal from the beginning can rejoice in that Season III is the best the series has ever been, while those who turned away may be pleasantly surprised upon giving the revival a second chance. If that isn’t enticement enough, the conclusion teases, presumably, a fourth season, so momentum is in the show’s favor. With a solid direction to follow, the future is looking just super.