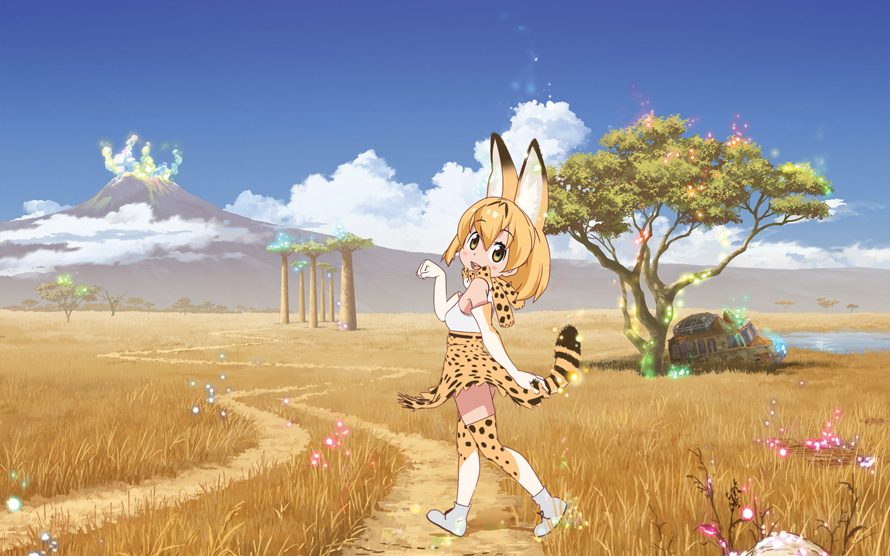 Kemono Friends proves you don’t need high production values to craft an engaging series with more to its narrative than meets the eye.

One day, a lost human child wanders into the Savannah Area and meets Serval, a Friend based on Africa’s serval wild cat. The lost child (nicknamed “Kaban” because she carries a large backpack) is amnesiac, with no memories of who she is or how she arrived at Japari Park. Kaban and Serval decide to visit the Japari Park Library to figure out where Kaban belongs and what kind of animal she is. They embark on a grand adventure, crossing deserts, fording rivers, and scaling snow-capped mountains as they trek across the park’s five major areas in their search for the truth. Along the way they encounter new Friends, solve problems, and overcome obstacles through a combination of teamwork and Kaban’s unique sense of ingenuity. 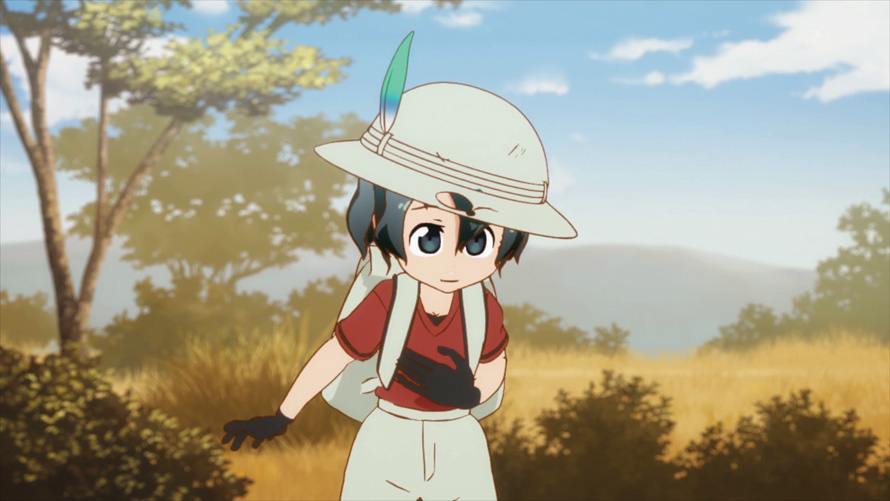 This is the premise of Kemono Friends, a 2017 TV anime with direction by Tatsuki and animation by Yaoyorozu. A mixed media project that also includes a (now completed) manga published in Kadokawa’s Monthly Shonen Ace magazine and a (now discontinued) smartphone game by Nexon, the Kemono Friends TV anime came out of nowhere to become the sleeper hit of the Winter 2017 season, proving that a show doesn’t need to have slick visuals and glossy animation if it contains a well-told story, excellent science fiction world building, and a lot of heart.

Kemono Friends took me completely by surprise. After following the news leading up to its release, I watched the first episode of the series, which I found an entertaining but not paradigm-shifting experience. At first blush Kemono Friends seems like a cute, moe show that can be enjoyed by children and grownups alike. Although the character designs by Mini Yoshizaki are strong, the music is catchy, and the attention to detail for incorporating animal behaviors into the body language of the Friends is clever, the overall quality of the 3DCG animation is so low rent that I couldn’t imagine the series catching on with a larger audience. 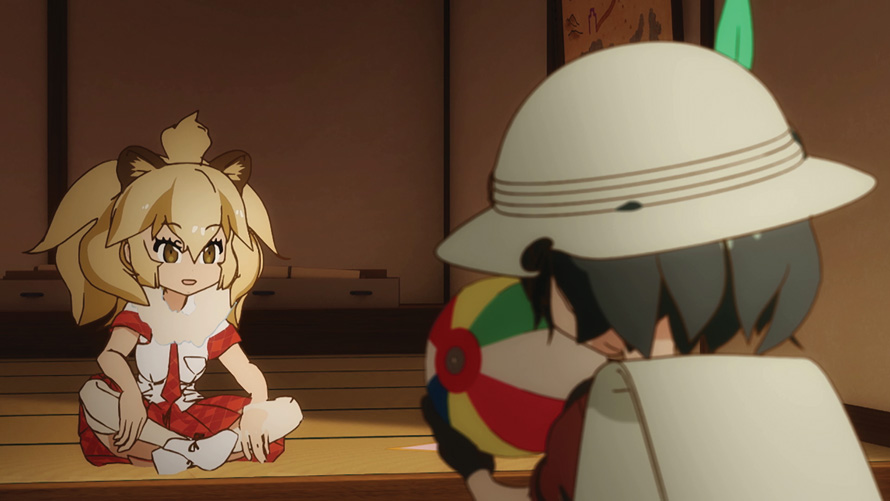 Weeks went by and I mostly forgot about the show, but then something strange happened. I started to see posts all over the Japanese anime blogosphere dedicated to Kemono Friends, and my Twitter feed was buried in an avalanche of fan artwork and comics celebrating the show from the perspectives of both Japanese- and English-speaking fans. Where there is smoke, there is fire, so I decided to give Kemono Friends another try. I watched the second episode and was instantly and irrevocably hooked.

Kemono Friends isn’t just a show about cute animal girls having cute animal girl adventures. Underneath its cuddly exterior, Kemono Friends conceals a well-crafted science fiction narrative with an extremely deft sense of pacing and plot economy. On a surface level, it’s a kid-friendly adventure story. But on a deeper level, the story sinks its fangs into the viewer through a creeping sense of dramatic irony. As Kaban and Serval continue their quest, the audience learns more than the characters do, and the viewers soon realize that something is amiss in Japari Park. 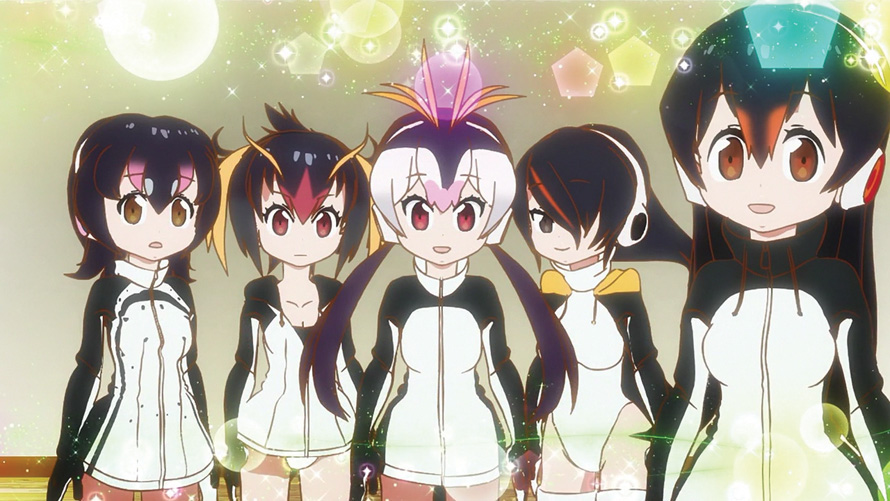 Even among the playful adventures, there are notes of melancholy. For example, some of the Friends (such as Crested Ibis) express a sense of ambivalence and uncertainty concerning their new human bodies. Another early clue comes from Lucky Beast, a model of service robot designed to maintain the park and provide tours for the visitors. Lucky Beasts are a fixture in Japari Park, and the Friends refer to each individual robot by the affectionate title of “Boss.” However, the Lucky Beast that plays tour guide to Kaban and Serval will only speak to Kaban. It doesn’t directly communicate with the Friends, who are shocked to learn that it can talk. Lucky Beast also seems to have trouble navigating the park, glitching out when the topography doesn’t match the information in its data-banks. A more overt sign of danger and intrigue is the presence of the Ceruleans—strange, shapeless, inorganic life-forms that pose a threat to anyone they encounter. The Ceruleans are also created by exposure to Sand Star, but the reasons behind their existence and their mindless aggression are unclear.

Observant viewers will also notice the decrepit state of Japari Park itself. The tour signs are rusted, the bridges and boardwalks are crumbling, and an entire underground labyrinth attraction is buried beneath tons of long-cooled lava. The entire park is in a state of disrepair, and this idea is reinforced by the ending theme animation, which uses pictures of real-life amusement parks in the process of being reclaimed by nature. How the Friends perceive their human visitor is another clue. None of the Friends immediately recognize Kaban as a human being, implying that most of them have never met any people within the park who weren’t originally wild animals transformed into Friends by the mysterious properties of the Sand Star. 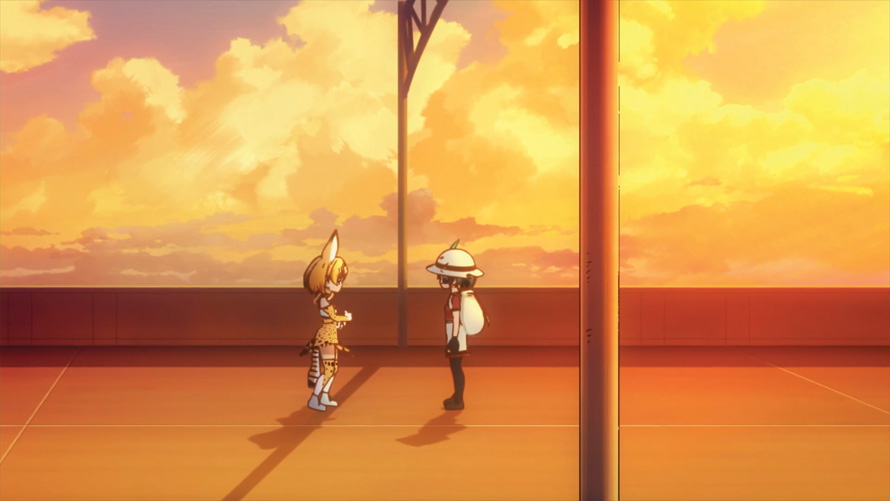 As Kaban and Serval explore each area and stumble across audio log entries recorded in the memory of Lucky Beast, the mysteries of Kemono Friends begin to unravel: at some point in the not-so-distant past, a terrible calamity occurred. Humanity no longer exists in Japari Park. The wondrous wildlife preserve is long-abandoned. Only the Friends remain to laugh and play among the vestiges of a vanished civilization, surrounded by technology that they—in their blissful ignorance—do not understand.

At its best, Kemono Friends invites comparisons to such luminary works of Western animation as My Little Pony: Friendship is Magic, Steven Universe, and Adventure Time. Like these other shows, Kemono Friends tells an all-ages story that nonetheless resonates with adult viewers. Like these other shows, Kemono Friends contains mature themes that tackle difficult issues, such as what it means to be human and how human beings should interact with the rest of the natural world. Crunchyroll currently streams Kemono Friends. Because of its rough animation, I can’t recommend Kemono Friends to everyone, but fans of post-apocalyptic science fiction should check it out, if only to witness that anime doesn’t have to be grim, gritty, or cruel to be compelling, and to confirm that bright and colorful cartoons can still be deliciously dark.

Kemono Friends is currently available to stream on Crunchyroll.