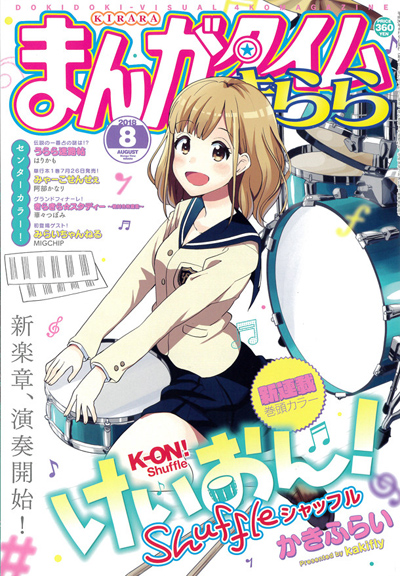 K-On! Shuffle, the K-On! spinoff manga written by original creator Kakifly, has gone into serialization in the pages of Manga Time Kirara magazine.

K-On! Shuffle takes place in a different high school than the original, but is also about the activities of a band club. In Shuffle, main character Murasaki is inspired to take up the drums after seeing “a certain band” from Sakuragaoka High School play at a school festival.

Sakuragaoka High School is, as fans will recall, the setting of the original manga, and we suspect that “certain band” will be familiar to fans as well.

When their high school’s pop-music club is about to be disbanded due to lack of interest, four girls step up to fill the membership quota. Unfortunately, lead guitarist Yui Hirasawa has never played an instrument in her life. Ever. And although she likes the idea of being in a band, standing in front of the mirror posing with her guitar is a lot easier than actually playing it. It’s gonna be a while before this motley crew is rocking out, but with their spunk and determination cranked to 11, anything is possible!