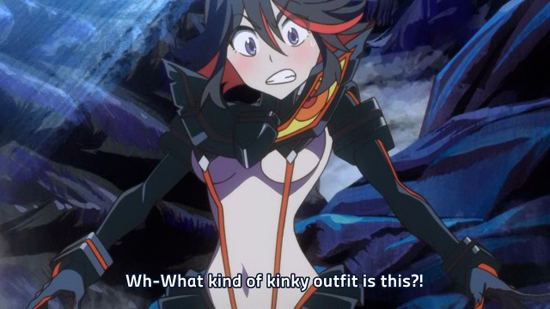 Ryuko’s victory would be assured, if only Senketsu’s battle form weren’t so … revealing.

Fear is freedom. Subjugation is liberation. Contradiction is truth. Fashion is fascism. Clothing is humanity’s original sin. These are the truths of this wild and crazy world. Welcome to Kill la Kill.

Kill la Kill is primarily the brain child of director Hiroyuki Imaishi and writer Kazuki Nakashima. The two previously collaborated on Tengen Toppa Gurren Lagann for studio Gainax, but Kill la Kill is the first major animated property from Imaishi’s studio, TRIGGER. Unlike many of its contemporaries, Kill la Kill is not based on a manga. It is not adapted from a series of light novels, either. Instead Kill la Kill is a wholly original work of TV animation, one that—like many of Imaishi’s earlier works—pushes the boundaries of good taste. 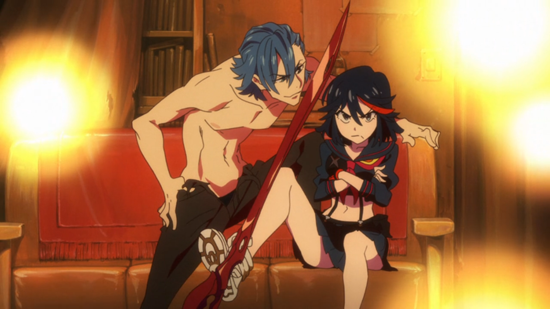 Kill la Kill has style and it has substance. It has great music composed by Hiroyuki Sawano. It has killer animation overseen by chief animation director SUSHIO. Kill la Kill is a show that starts off with nods to delinquent high school shows like Sukeban Deka and Sakigake!! Otokojuku. It draws further inspiration from violent shonen action series like Fist of the North Star and Saint Seiya. It tips its hat to the manga of Go Nagai. Then it ratchets up the intensity until the plot rockets into space.

The elephant in the room with Kill la Kill is its use of male and female nudity. Characters both major and minor spend some portion of the series in the buff, be it the initial awkwardness of Ryuko’s battle dress or the glorious exhibitionism of Aikuro Mikisugi and the nearly naked guerrillas of the underground freedom fighting group, Nudist Beach.

Some critics have condemned this as crass sexism, but I contend that Kill la Kill earns its nudity. Clothing and lack of clothing are central conceits throughout the series, and nakedness isn’t merely played for laughs or for titillation, but for deeper thematic purposes. I won’t say more on this subject for fear of giving away crucial plot details. Suffice to say that Kill la Kill is less about pervy peepshow thrills and more about characters learning to be comfortable in their own skin, whether that skin is bared for all to see or not. 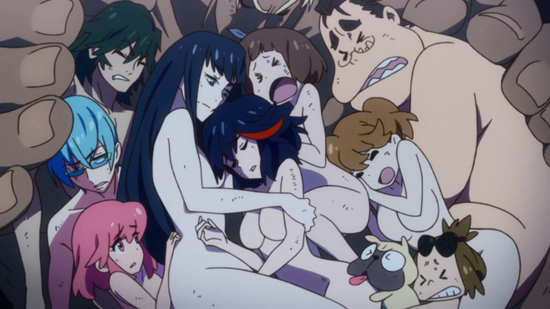 Whether Kill la Kill is exploitative or empowering remains up for debate, but viewing the series through the lens of sex-positive feminism isn’t necessary to enjoy it. Kill la Kill can also be consumed as pure spectacle. The series is filled with high-octane fight sequences that revel in ridiculous collateral damage (e.g., one battle levels the city of Osaka) and ludicrous violence, where the slightest injuries result in comical geysers of blood. Kill la Kill is also a stylistic atavism, a throwback to earlier eras of Japanese animation.

To achieve its unique visual aesthetic, numerous analog techniques were deployed, such as creating the backgrounds as watercolor paintings on paper first. These paintings were then digitized and composited to integrate them with the cell and computer animation. The animators of TRIGGER also used a technique that they dubbed “harmony” to match freeze-frames of dynamic action scenes to dramatic, full-color paintings for an extra visual punch. This technique is reminiscent of the visual stylings of the late, lamented director Osamu Dezaki in such works as The Rose of Versailles and the Golgo 13 films. Animation director SUSHIO (the pen name of animator Toshio Ishizaki) drew upon the heavy lines and emotive compositions of gekiga comic books to express extreme emotional states. The end result is dirty, organic, exaggerated, and thoroughly unlike the clean-edged, hyper-polished animation that defines Kill la Kill’s contemporaries. 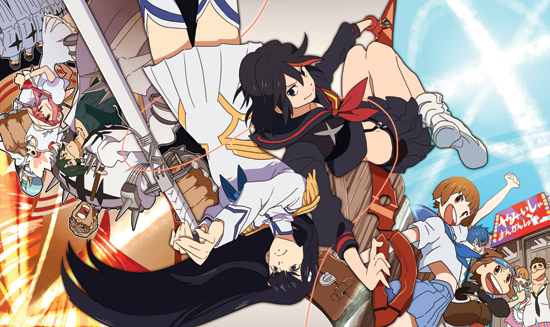 But brilliant visuals and amazing animated sequences alone can still create a shallow viewing experience. Dead Leaves, one of Hiroyuki Imaishi’s previous works, clearly demonstrates this problem. Kill la Kill would be nothing but explosions and awesome action scenes if it didn’t also have heart, and no character embodies the heart of Kill la Kill so thoroughly as Mako Mankanshoku. A consummate underachiever, Mako makes up for her relative lack of book learning with manic energy and an overpowering zeal for her friendship with Ryuko Matoi. Mako puts the ‘idiot’ in ‘idiot savant,’ often interrupting seemingly dramatic moments with her bizarre and cartoonish antics.

In the hands of another team, Mako might have ended up as an annoying sidekick/helpless damsel along the lines of Mayumi Takahashi in Kekko Kamen. But with Imaishi and company at the helm, Mako overflows with an infectious charm that is impossible to resist. Mako also anchors the series such that even during the darkest moments of conflict, there’s hope and laughter to spare. 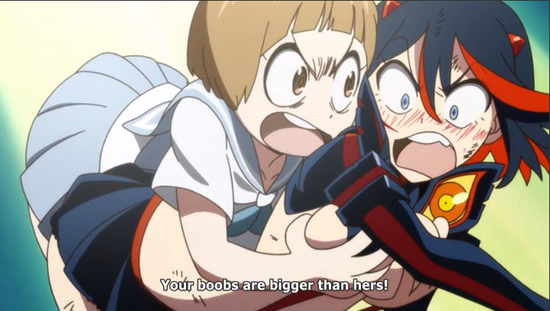 Mako isn’t the only outstanding character, though. The entire cast has something special to offer, from Ryukoi’s hot-blooded heroism to the despicable villainy of Ragyo Kiryuin, the CEO of the evil REVOCS corporation and matriarch of the Kiryuin clan. Kill la Kill makes the viewers emotionally invested in the lives of its characters, and that’s no small feat considering that one of those characters is a talking sailor suit.

Kill la Kill is not just one of the best anime series of 2013; it has all the elements that make a classic. It may not be as mature in tone as
Cowboy Bebop or as psychologically scarring as Neon Genesis Evangelion, but it is a tremendous action show with a great sense of humor. Kill la Kill is also deep enough to revisit again and again. I watched the entire show during its initial simulcast, even tuning in to Daisuki.net to watch the raw Japanese streams a few hours before the English translations were published on Crunchyroll. A week after Kill la Kill’s initial airing concluded, I watched the entire show again from beginning to end. I watched it a third time while purchasing the Blu-ray discs from Aniplex of America, which are top notch in terms of quality but also not the best option for all would-be viewers because of their premium pricing. 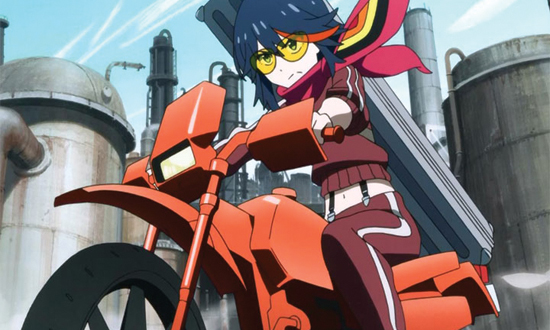 Don’t despair about accessibility, though. At the time of this writing, Kill la Kill is still available on Crunchyroll. It’s also available on Netflix’s streaming service, and the show is just beginning its broadcast on Cartoon Network’s Toonami programming block. Whether you’re trying to catch all of the myriad references to Japanese history and pop culture or whether you just want to see a solid story about mothers and daughters, about sisters and friends, about humans wearing clothing and clothing wearing humans, if you’re old enough that a TV-MA label is no barrier to entry, you owe it to yourself to check out Kill la Kill.