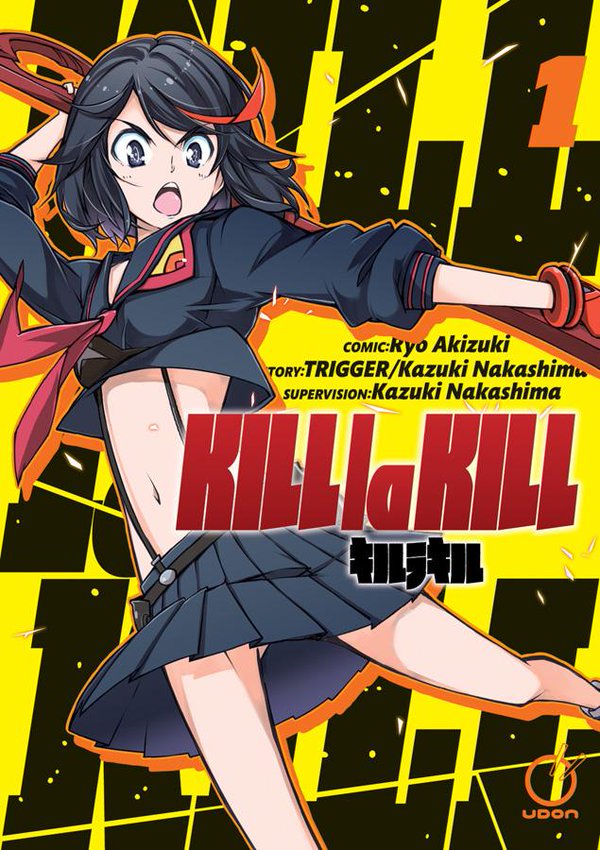 Often when reading a story, one particular element may stick out. Kill la Kill, however, has so much resplendent insanity it’s hard to know where to start.

For one, it has a school that’s so strict it casually kills its own students as a form of discipline. One of the first glimpses we get of the school shows a dead, naked student propped out front with a sign that says, “This is a naked pig who dared to defy Honnouji Academy. As such, justice was dealt.” The students aren’t even put off by this death because they’re so used to it; his classmate just points out that there’s an empty seat the transfer student can fill. Students’ performances also affect their lives outside of school, with students who are low on the totem pole forced to live in slums.

Second, Kill la Kill stars a teenage girl who fights with a giant half pair of scissors. This might sound like an odd weapon, but she has a background story: she found her father killed by the giant scissors and she takes the half still left in his body, vowing to find the other half and take care of the person who did this to him. She will literally walk down the street with a giant half pair of scissors, ready to use it.

Third, the said girl, Ryuki, has a perverted and demented sailor uniform that basically puts the rest of fanservice in manga to shame. The uniform talks and drinks blood and makes Ryuki more powerful when she wears it. It also makes people stare more. (What makes it even more weird is the fact her father made her this uniform.) But she’s not the only one who wears a magical uniform—privileged students at Honnouji Academy are able to wear Goku Uniforms, which give them special powers. The students are vain about these powers, but Ryuki’s messed up sailor outfit might be able to put all those Goku Uniforms to shame.

All of these strange elements come together to make the uniqueness that is Kill la Kill. It can get away with things that might raise eyebrows in other stories because it is so purposefully over-the-top that you know not to take it seriously and that you should just be along for the ride. If you take Kill la Kill literally, that’s missing the point of it. Kill la Kill is meant to be as outrageous and uninhibited and zany as possible, and it pulls this off because it also gives us characters we care about so it’s more than outrageousness for outrageousness’s sake. Udon is handsomely packing this manga in a hardcover book, showing special treatment for this popular fan favorite.