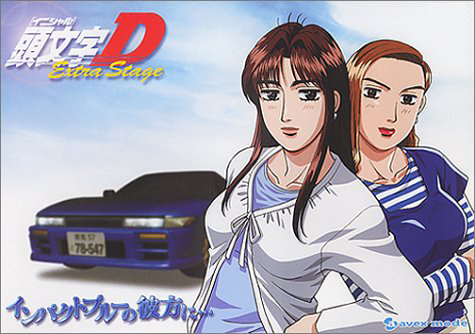 Mako and Sayuki, otherwise known as the racing team Impact Blue, are just a couple of girls trying to make it in the male-dominated world of Initial D. Much like real world racing, females in Initial D are few and far  between, and the female characters that do appear rarely play any substantial role. In fact, Mako and Sayuki may be the only females in Initial D that aren’t tepid love interests, background decoration or entirely irrelevant to the plot. This could be the reason they were chosen to feature in their own two-part OVA, or it could just be because girls with boobs tend to sell direct-to-video cartoons.

2000’s Initial D Extra Stage 1.0 (not to be confused with 2008’s Extra Stage 1.5) consists of two episodes, roughly 25 minutes long, focusing on Impact Blue and events that occur before and after Initial D’s second season, titled Second Stage. You might assume the series’ “opponent of the week” formula makes it particularly ripe for side story opportunities, as lots of characters are introduced and, after being defeated by protagonist Takumi, are rarely seen again. In theory, this should be true, but if Extra Stage is any indication, it doesn’t quite hold up in practice. Without the series-defining tension and suspenseful build up of the regular seasons, along with some flat character personalities, Extra Stage is a tedious affair that will only appeal to completist Initial D fans. 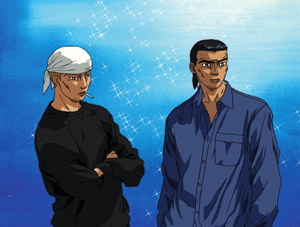 The first episode, “Beyond the Impact Blue,” takes place shortly before Second Stage begins. Mako’s concentration is wavering after being stood up by Akina Speed Star leader Iketani in the first season, but she has to pull it together to defend the pride of her home turf against the racing team known as Emperor. Emperor plays a major role in the second season of Initial D, but there’s little in this episode that actually adds anything to your enjoyment or understanding of that season. A character who appears in Second Stage shows up, Impact Blue races him, the episode ends.

Without the trademark build up of tension over numerous episodes, the race between Impact Blue and the member of Emperor turns out to be rather dull and uninteresting. It quickly becomes apparent how much of Initial D’s appeal isn’t in its characters or even in the actual races, but in how those races are handled; both in terms of of building up tension prior to a race and then well-placed cliffhanger episodes during the race. That successful formula simply can’t work in a one-off episode like this.

The second episode, “Sentimental White,” deviates even more from the Initial D formula, as it contains no actual racing. Mako is set up with another street racer by Sayuki, and as things get serious he asks Mako to give up on racing. Mako decides that she needs to be her own person and pursue her own racing goals, leaving her would-be boyfriend (literally) out in the cold. It’s an unusually empowering decision for a female character in such a male-dominated series, but it loses any impact because the viewer is never given a reason to actually care about these characters. 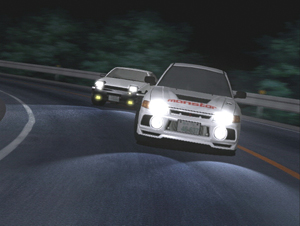 This underlines an important flaw in Initial D: with so much of the focus on racing, taking the characters away from that reminds the viewer they’re just not very interesting characters. For whatever reason, the writers fail (or don’t care enough to) establish any sort of depth to the characters, rendering these character-focused episodes entirely uninteresting.

It’s worth mentioning that for an OVA series focusing on two women, Mako and Sayuki are both surprisingly ugly characters. Granted, their designs here are very similar to the original character designs from the manga by Shuichi Shigeno (Shigeno excels at illustrating cars, but lacks skill with the human form), but seeing such homely women starring in anime is an odd sensation. Compounding this odd sensation is the occasional fan service thrown into each episode of Extra Stage. Does anyone really want to see the naked breasts of an unattractive anime character? Do Initial D fans even want to see naked breasts in the first place? These are the incredibly superficial questions that run through my mind when watching such a boring title.

The overall lesson learned in Extra Stage is that Initial D’s specific formula is the key to its success. As I mentioned in my review of Second Stage in this month’s issue of Otaku USA, Initial D is little more than a shonen sports manga featuring cars. It’s a particular (if slightly repetitive) formula that works well, but trying to add too much depth or characterization doesn’t work, especially when it’s handled this poorly.

That’s not to say side stories can’t deviate substantially from the formula and style of the original work (Gundam 0080: War in the Pocket is an excellent example), but without some borderline competency and worthwhile character development, there’s no point to it. Extra Stage does not possess this competency. Even diehard Initial D fanatics will struggle to get excited over Extra Stage. Turn on your turn signals and pass on this one.