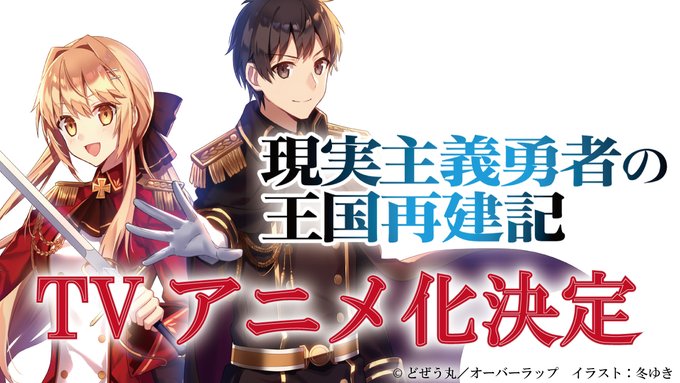 We just posted about one earlier today, but there’s another isekai anime on the horizon! The latest is Dojyomaru’s How a Realist Hero Rebuilt the Kingdom, which now has an anime in the works, with more details to be revealed at a later date.

The Overlap Bunko imprint has been publishing the series since May of 2016, and 800,000 copies have been printed digitally and physically since. Volume 12 is on the way to Japan on April 25, and there’s also an ongoing manga adaptation featuring illustrations by Satoshi Ueda.

“O, Hero!” With that cliched line, Kazuya Souma found himself summoned to another world and his adventure–did not begin. After he presents his plan to strengthen the country economically and militarily, the king cedes the throne to him and Souma finds himself saddled with ruling the nation! What’s more, he’s betrothed to the king’s daughter now…?! In order to get the country back on its feet, Souma calls the wise, the talented, and the gifted to his side. Five people gather before the newly crowned Souma. Just what are the many talents and abilities they possess…?! What path will his outlook as a realist take Souma and the people of his country down? A revolutionary transferred-to-another-world administrative fantasy series starts here!

And here’s what the original author had to say about the announcement:

An unexpected anime adaptation! One day, I was called to Overlap’s head office because I was told that there was news about a new mixed-media project, and the person in charge said to me, ‘It was decided to make it into an anime (for 95 percent).’ I remember I was just stunned at the time. I went there only with the feeling that it might be made into a drama CD or something like that… This is also thanks to the novel’s illustrator Fuyuyuki-sensei, the manga’s illustrator Satoshi Ueda-sensei, the people involved in the foreign translation editions, and the readers who have supported this novel above all. I will do my best to meet your expectations, so please continue to support the series.

how a realist hero rebuilt the kingdom 1