At Miss Weaver’s Academy for the Scientifically Gifted and Ethically Unfettered, also known as Hollow Fields, madness and macabre are king. With classes like Killer Robot Construction and Live Taxidermy, this grim boarding school dedicates itself to raising and teaching the next generation of mad scientists and evil geniuses. Little Lucy Snow, on the other hand, couldn’t be any less of a mad scientist. She was supposed to attend St. Gabalt’s Academy for Young Ladies, but by some twist of fate she finds herself enrolled into Miss Weaver’s twisted nightmare of a school. And the last thing she wants is to end up in detention at the old windmill, where the students go in but never come out. 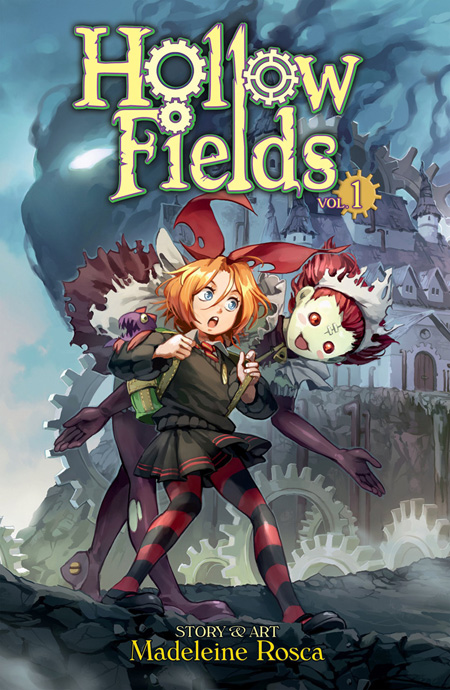 The first installment of the three-volume Hollow Fields has a bit of a slow start, but by the end, the characterization, world-building, and tone have all been established. Most of this first volume is focused on Lucy trying to adapt to her new surroundings and cruel circumstances. She spends a lot of her time reacting in bewilderment and horror at the insanity that surrounds her, but she ultimately proves to be very adaptable, formulating ways to survive the school’s “academic” routines.

Miss Weaver’s Academy conveys the emotions of going to a new school better than a realistic school possibly could. The first day of school is always frightening and mystifying, and that feeling is evoked well here, creating instant sympathy for our protagonist. One of the greatest strengths of Hollow Fields is the juxtaposition of the dark subject matter with the book’s general lightheartedness. The teachers and other students have been dealing with the macabre so long that it’s no longer a big deal to them, and they believe Lucy to be the same as them. This contrast helps the more serious beats of the plot, like when Lucy steels her resolve to properly finish her homework, land with more weight.

The attractive visuals, presented in color in this new edition, are alternately ghoulish, cute, playful, or all three at once. Australian writer/artist Madeleine Rosca has a Western-based art style with clear Japanese influences. The result is better than if, say, the artist had put in a lot more time mimicking a Japanese artist’s work. Such comics tend to end up feeling too technical with not enough sense of life in their pages. Hollow Fields is a fun and inventive read that will appeal to fans of Harry Potter and A Series of Unfortunate Events.

Fist of the Blue Sky REGENESIS Anime Comes Through with New Promo
SHIROBAKO is a love letter to the people who make anime a reality.