Nevertheless, Akasaka journeys out to the cursed village, trying to figure out if the people there have kidnapped the minister of construction’s grandson. The people of Hinamizawa really don’t want a dam there, and they’re not the kind of people to use nice, legal means of changing things.

Once in Hinamizawa, Akasaka attempts to pass off as an easygoing tourist, not a cop who’s busy investigating. A cute little girl named Rika shows him around, and he can’t help but think to himself how much he’d like to have a little girl like her. He would dress her up and have her call him “Papa.”

The problem is that Rika isn’t always so sweet and cute.  One second she’s saying “mew” like a cat, and the next her whole expression has changed and she’s giving off dire warnings. “The dam project is going to be done away with,” she says.  “It has already been decided.”

She’s the only child at the Furude Shrine and people say she’s the reincarnation of Oyashiro-sama, the village’s patron deity. Far from any benevolent deity, Oyashiro-sama is known for cruelty and sadism, so this superstition leaves off with a sinister feeling. 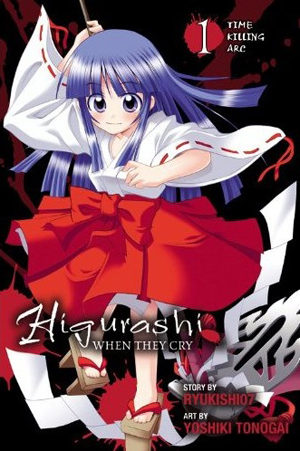 Once the image of cuteness and innocence, Rika now flashes into an almost demonic character whose presence can only bring bad tidings.

Akasaka came to the village to investigate, but, like so many visitors, he’ll find himself pulled into the drama. He learns more about the Sonozaki family, who supposedly earned their money by selling canned human flesh. Or is that only a rumor, like Rika’s reincarnation? Who wants to risk it?

Like all the Higurashi volumes, the first in the Time Killing Arc is creepy, spooky and unsettling, but all in a fun way. Perhaps the fact that it’s so out there—but so accurate to primal fears—is the reason for its popularity. It’s not realistic, and yet it touches a nerve, either with gore or psychological implications. And I just think little kids are scary in general.