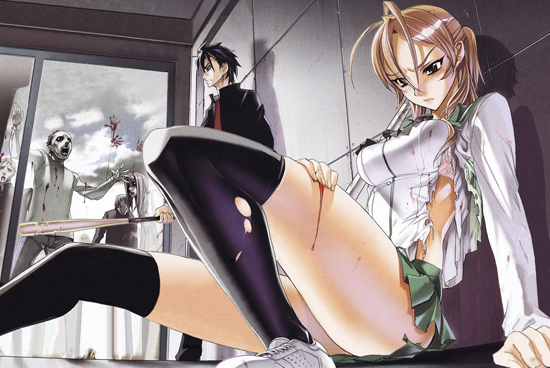 Zombie-related entertainment used to be something I would flock to blindly; all I needed was a hint that the shambling dead would be present and I was ready and rarin’. Sadly, as is the case with most great things—like ninjas, pirates and cats—the Internet has run the whole zombie thing pretty darn ragged. I hate to let this kind of thing get to me, but it’s a fact of life online, and it can make getting excited about this stuff in a world saturated with both slow AND fast zombies a somewhat difficult process.
With that out of the way, I should go ahead and say that I’m loving Highschool of the Dead so far. It’s as serious about its shambling zombie action as it is the flapping of breasts and flashing of panties, which is to say very. Director Tetsuro Araki (Death Note) knows what both he and you want: boobs and brains. Both are tirelessly thrust in faces and splattered on school uniforms, respectively, making Highschool of the Dead as shameless as it is entertaining.
The premise is simple enough, especially if you’re a veteran of the zombie film sub-genre. Students are going about a seemingly normal day of school when one small zombie incident makes its way through the front gates and spreads like wildfire. The outbreak happens fast here, ensuring no time is wasted between setup and payoff; only a few minutes pass without any bloodshed or panties-in-your-face fan service.
I haven’t read the original manga—written by Daisuke Sato and illustrated by Shoji Sato—but if the anime is any indication, the creators wear their influences proudly on their sleeves. Highschool of the Dead stays pretty firm within classic zombie guidelines, from the way the outbreak plays out beyond school property to the means of undead disposal. That means lots of thinking-on-the-fly survival, like when the resident fat nerd of the school crafts a nice little pencil sight for his gas-powered nail gun. 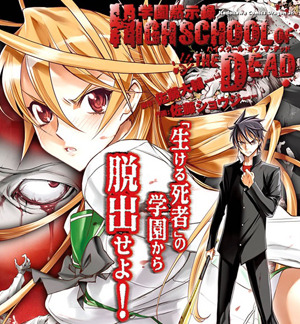 The show also manages to showcase the extreme horror of the situation surprisingly well, despite the juxtaposition of the anime character designs, which are admittedly kind of odd in this context at first. Episode one, for instance, primarily follows Takashi and Rei, two classmates who team up with mutual friend (and Rei’s boyfriend) Hisashi to cope with the sudden outburst of madness and gore. Things take a turn for the grim, however, when Hisashi suffers a nasty zombie bite and, well, these things never wrap up nicely, do they?
What follows is dark, and though the constant jiggling and near-orgasmic female screams for help can be kind of jarring, the tone is fairly consistent without being oppressive or sucking all the Dead Rising potential fun out of the premise. It’s nice to see the threat handled with the proper “we’re screwed” attitude, making way for a desperate lot of students that are gradually finding a way to work together to escape and fight off this undead menace.
As the time of this writing (ed: 7/14/10), the first two episodes of the show are available (see the link below), and they spell a lot of promise for the rest of the series. 13 episodes should be plenty to tell an exciting tale of zombie survival without running it into the ground. With the manga at five volumes and still running in Monthly Dragon Age, though, there’s always the possibility of more panty-laden carnage down the line should this prove a success.
High School of the Dead is available streaming via The Anime Network.