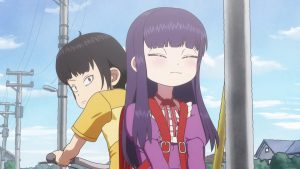 After premiering as part of the summer anime season, the next stop for the Hi Score Girl anime is Netflix. Warner Bros. Anime held a premiere panel at this past weekend’s Otakon, and they took the opportunity to announce plans for a December 2018 launch on the streaming service.

Based on the manga by Rensuke Oshikiri, Hi Score Girl is set during the 2D arcade fighter boom of the 90s. Sixth-grader Haruo spends all of his time at a seedy arcade, but his world completely changes when he discovers the dominating skills of his female classmate Akira, who wrecks him over and over again in Street Fighter II.

Yoshiki Yamakawa (Kill Me Baby) directs the adaptation, with Tatsuhiko Urahata (Tsuredure Children) on series composition for the J.C.STAFF production.