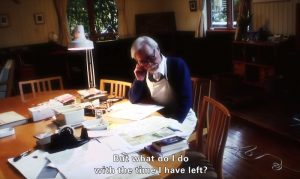 Following up on last month’s license announcement, distributor GKIDS came through with more details about the upcoming theatrical release of Never-Ending Man: Hayao Miyazaki. The 2016 documentary follows the famed anime director after his 2013 “retirement” and through his struggles creating the CG-animated Boro the Caterpillar short. The winter 2018 plans have now been narrowed down to December 13 and 18.

Both nights of the English-subtitled U.S. screenings—which are planned for over 500 cinemas nationwide—will kick off at 7:30pm local time. You can head to the official site to see if it’s playing near you.

In 2013, Academy Award®-winning film director and animator Hayao Miyazaki suddenly announced his retirement at the age of 72. But he can’t shake his burning desire to create. After an encounter with young CGI animators, Miyazaki embarks on a new project to utilize CGI for the first time ever. But the artist, who has been adamant about hand-drawn animation, confronts many challenges that threaten to cancel the film. Can an old master who thinks he’s past his prime shine once again? This program goes behind the scenes over two years as Miyazaki overcomes struggles to create his short film Boro the Caterpillar using CGI.