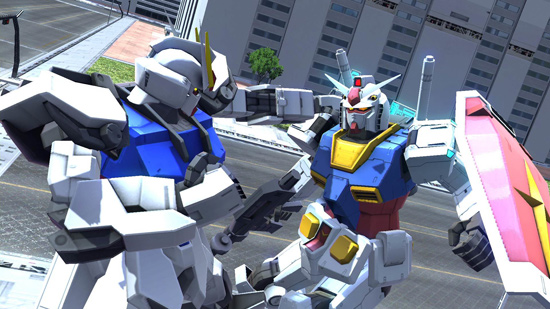 Gundam Battle Operation was, if nothing else, an interesting failure. Released for the PS3 back in 2012, it drew inspiration from a number of earlier Gundam games and attempted to shoehorn some familiar (and unfamiliar) ideas into a free-to-play online game.

That game’s sequel, Battle Operation Next, recently had a limited beta event on PSN (both PS3 and PS4) and we played a few rounds. Here’s what we thought.

The original Battle Operation was an uneven mix of gameplay mechanics borrowed from PS2 and PS3 Gundam shooters, some new ideas from a cancelled Xbox 360 game, and the then-new free-to-play format.

The basic control mechanics that failed to utilize the twin sticks, as seen in games like Gundam: Side Stories, felt thoroughly played-out by the end of the PS2 era and all the more dated by 2012. Interestingly, it borrowed the ability to exit your Mobile Suit and move around on foot from the cancelled Xbox 360 title, Gundam: Operation Troy. While terrifying to run around underfoot of giant robots, it lent a sense of scale rarely seen in Gundam games. 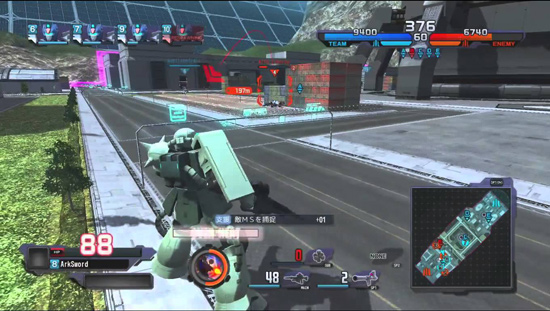 Ultimately, it was an entertaining enough diversion that left you thankful you didn’t have to spend 7,000 yen to play it.

If anything, the series needed to draw further inspiration from Operation Troy and look towards Western-developed online shooters, like Battlefield, for some new ideas to inject into the Gundam franchise games. The idea of shoe-horning outdated single-player mechanics into a modern online game just didn’t work, although it was a tantalizing taste of how good an online Gundam game could be

So how does Battle Operation Next fare? Well, not great.

Immediately upon booting up Battle Operation Next, it becomes apparent where the designers drew their inspiration from this time: Gundam Extreme VS (EXVS). Everything from the menu design, to the mix of inter-universe mix of Mobile Suits, to the more arcade-y gameplay, seems inspired by that series. That’s not a bad thing, mind, because the VS series has been arguably the best Gundam game series of the past decade and has supported online play in both arcade and home versions. 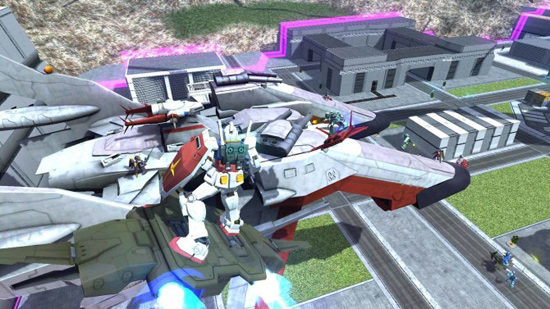 The thing is, Next seems to borrow EXVS’s flash and style, but doesn’t bother drawing from the solid gameplay underneath. Next still feels very reminiscent of its PS2-era roots, with a lock-on system that feels just as out of place and restrictive as it did last time. The game does allow you to aim manually, but doing so drains the same boost gauge that limits your boosting and jumping, so it’s clear the designers didn’t want you manually aiming too much.

If you’re a Universal Century snob like myself, you’ll also be disappointed by the fact that Next eschews the One Year War timeframe of its predecessor and incorporates Mobile Suits from a variety of Gundam series. That wouldn’t be so bad – except your very first choice of Mobile Suits is between a Zaku II and whatever the hell the equivalent of a Zaku II was in Gundam SEED, and who actually wants to play as something from Gundam SEED?

Disappointingly, while clearly inspired by the more frantic pace of EXVS, Next still feels very old and very clunky. That underlying control style is frustrating bordering on insulting if you’ve had the pleasure of playing any other online game in the last five years or so. This was a beta test, so one assumes things will get cleaned up a bit before its final release, but it bares mentioning that the game felt decidedly sluggish. How much of that was the game itself and how much of that was lag, I’m not sure, but it feels nowhere as polished as EXVS or even the original Battle Operation.

There’s also the issue of the game’s free-to-play system, which is something of a double-edged sword. For Western fans, it’s honestly not such a bad deal, given that it’s, well, free. That means foreign Gundam fans can create a Japanese PSN account and give it a try without having to pay for an expensive import copy. Creating a Japanese PSN account isn’t particularly difficult, so there’s nothing to lose. The downside, of course, is that if you actually do want to spend money on the game, you’ll have to buy Japanese PSN point cards.

The other major issue for foreign fans is lag. Given that it’s online, and the majority of players will be located in Japan, your gameplay experience can run the gamut from “mostly okay” to “a jittery mess.” This will likely be less of an issue if you’re on the West Coast, but a potential deal breaker if you’re on the East Coast.

The bottom line is that, ultimately, you get what you pay for. If you’re a Gundam fan and into online games, by all means check it out once it sees an official release — just don’t get your hopes up. If you’re really itching to play some Gundam online, and actually want it to be fun, pick up EXVS for the PS3 instead.