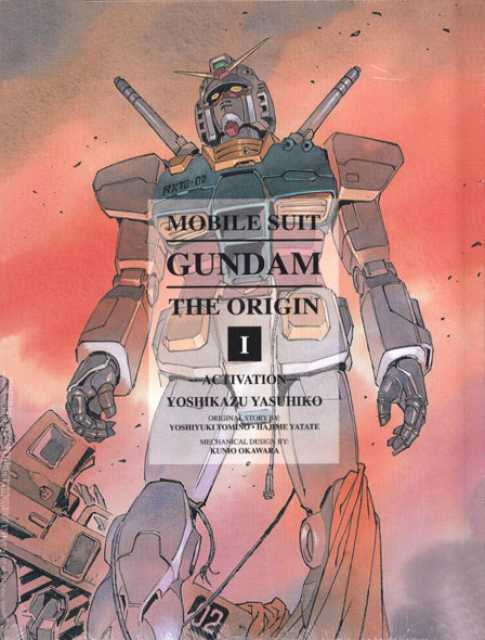 I consider myself a casual Gundam fan at best. I’ve seen enough series and movies to satisfy myself, but I’m definitely not a maniac for the work of Yoshiyuki Tomino and those who followed. Some of it is pretty good, a few pieces are really good. With that said, I’ve held the work of Yoshikazu Yasuhiko in high regard from the moment I first nabbed the old Viz release of Mobile Suit Gundam: The Origin. That admiration has only magnified in the wake of Vertical Inc.’s deluxe hardcover, which is truly a sight to behold.

It’s not often that I bother taking up space just to discuss the presentation of a book, but this is certainly one of Vertical’s finest releases. Both the graphic and actual material design of the cover is special, and the interior is of a much higher quality than your average manga. This especially holds true throughout the healthy handful of color sections, which look absolutely gorgeous on the glossy paper stock.

Gundam: The Origin—which originally kicked off its serialization in Gundam Ace magazine over a decade ago—adapts the 1979 Sunrise anime that started it all. It stays pretty faithful to Yoshiyuki Tomino and Hajime Yatate’s story, tossing us right into the middle of the war between the Earth Federation and the breakaway nation known as the Principality of Zeon. Yasuhiko adds his own spin and flavor to some aspects of the narrative, but the tale of young Amuro Ray and his fateful run-in with, and subsequent piloting of, the new experimental RX-78 Gundam mobile suit will be very familiar to anyone who’s seen the anime.

Much of the first volume is spent getting the reader familiar with the cast, many of which are civilians like Amuro Ray who are thrust into crucial roles aboard the White Base ship. On the Zeon side of the coin is the iconic Char Aznable, who swoops into battle in his menacing Zaku as the Red Comet. His introduction into the fray is a great example of Yasuhiko’s flair for the dramatic, with characters instantly generating a strong sense of foreboding as he blazes over to intercept Amuro Ray’s second excursion in the RX-78.

Yasuhiko’s work is just really strong throughout. Fights between mobile suits are exciting, and manage to stay clear despite an impressive amount of detail in the depictions of Kunio Okawara’s mechanical designs. He also knows when to tone down what would otherwise be cluttered panels. There are plenty of standout moments that illustrate this nicely, like Amuro’s first on-foot encounter with a Zaku that leaves him fleeing from white-hot pounding artillery shells as they fall from above.

To top it all off, the book closes with an essay by Gainax’s Hideaki Anno, the mind behind Neon Genesis Evangelion and more. The whole package is an absolute must for fans of Gundam, but I’d say there’s plenty to enjoy in this nearly 450-page monster for anyone remotely interested in mech action and sci-fi storytelling. Apparently orders for the second volume are down significantly from the first, which is a shame. Hopefully everyone who was so hyped for volume one will continue to put their money where there mouth is, because these releases deserve as much love as was put into them.