Sakumi Kyouichi comes from a long line of exorcists and dreams of helping his beloved older sister Hanaichi fight ghosts, demons, and gods. Unfortunately, Sakumi angers a local god and his sister sacrifices herself to save her brother’s life. Skip ahead six years and Sakumi is still searching for his sister who disappeared so mysteriously. He has honed his exorcism skills to a razor edge and refuses to give up, no matter how many monsters he has to defeat along the way.

Sakumi’s efforts at last bear fruit when he meets Chloe Kowloon, a grim reaper who claims to know Hanaichi. Chloe has amnesia but she is convinced that if she helps Sakumi complete his sister’s “Ghost Diary,” her memories of Hanaichi will return and together they can find her. 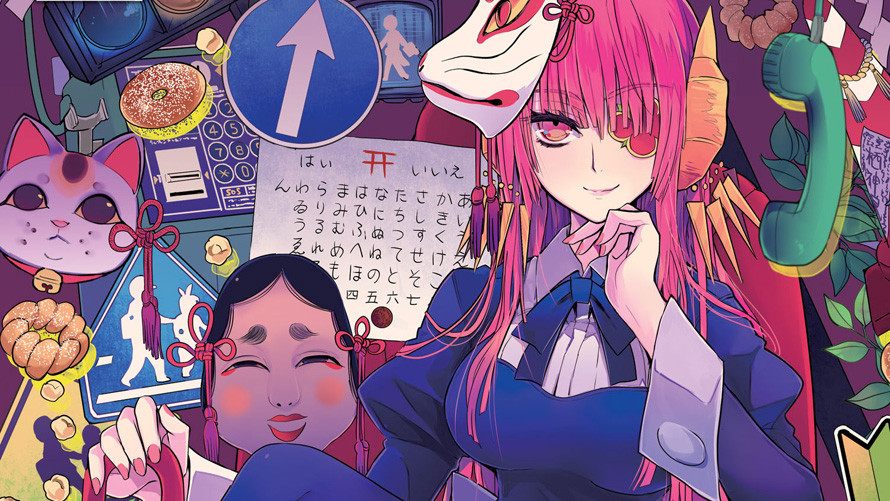 In many ways Ghost Diary is pretty typical supernatural manga fare. There are jokes about Sakumi’s sister complex, a gaggle of oddball sidekicks in the form of the school Occult Club, and plenty of fanservice provided by Chloe, who moves into Sakumi’s home and flaunts her assets in his direction. Natsumegu’s commentary throughout the book provide a peek into the creative process and also explains that Ghost Diary is basically fanfic, composed of bits and pieces from other manga, TV shows, and video games. That doesn’t mean that the book is completely derivative but it does feel very familiar and not terribly original. It alternates between entertaining scenes and icky ones, such as when Mayumi, one of the Occult Club girls, gets molested by the ghost of a necrophiliac.

Art-wise, Ghost Diary has shades of CLAMP in the character designs. Sakumi, Hanaichi, and Chloe are reminiscent of XXXHolic characters, while the rest of the cast looks duller by comparison. Mayumi looks like a generic heroine from a dating sim. Though the monsters themselves are pretty clever—coming from traditional Japanese yokai, urban legends, and Natsumegu’s imagination—their designs are only so-so, a disappointment since they should be a huge feature of the book. In addition, the action scenes could all stand one or two extra panels to give them more clarity.

On the upside, the character interactions are fun and the pacing is excellent. If you can ignore the squicky parts, this is a decent dramedy with some okay monsters.