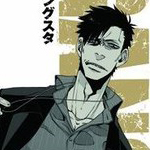 Back in May we reviewed the first volume of Kohske’s Gangsta. manga, released in North America by VIZ Media. Now the action series is preparing for an anime adaptation, as announced on the wrap-around jacket of the manga’s sixth Japanese volume.

The cast from the drama CD reprises their respective roles, including Junichi Suwabe as Worick Arcangelo, Kenjiro Tsuda as Nicolas Brown, and Mamiko Noto as Alex Benedetto. They star in the story of two men, Nick and Worick, who take on jobs from both the mafia and police in the rotten town of Ergastulum.