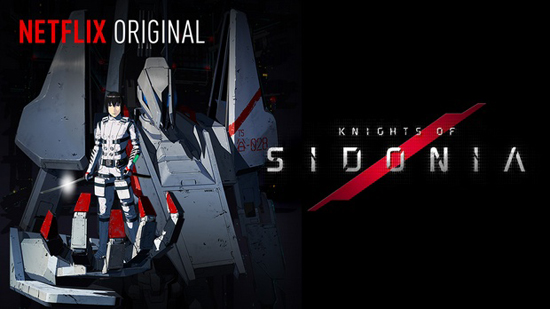 It’s the distant future. Humans no longer live on Earth, but on a manmade planet-sized spaceship called Sidonia. The roughly 500,000 people living on it are what’s left of the human race after being ravaged by aliens known as the Gauna. Knights of Sidonia tells the story of Nagate Tanikaze, an underdweller who becomes humanity’s greatest hope to survive.

The first thing I noticed when I started watching the show was its art style. While still distinctly anime-styled, the show is animated in CGI. It reminds me of RWBY except much more polished and fluid. I’m curious to see how this particular style evolves over the next few years as more shows adopt it.

I do have a few problems with the style, though. For much of the show I had a hard time telling characters apart. A lot more could have been done to differentiate between character designs to make them stand out. It doesn’t help at all that for the most part the entire cast wears the same outfit. I feel like the show’s team made some shortcuts to save time and money. You would think that in a universe where cloning is commonplace, Sidonia’s society would have more incentive to express individuality with things like hair dying and facial tattoos. Even characters who probably aren’t clones look too alike for my taste. 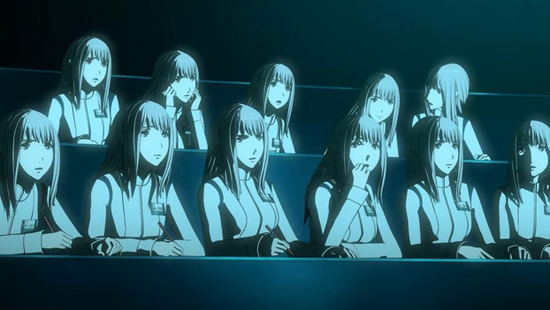 While I’m not exactly blown away by the show’s aesthetics, I have to admit that the story is really interesting. There are so many fascinating concepts dropped on us early in the show that made me want to know more about their world. Human photosynthesis, cloning, a third gender, easily attainable immortality and more. Unlike a lot of shows, Knights of Sidonia actually stays committed to these and leaves me satisfied when they’re tied into the world-building. I just wish they would have cared to explain the existence of Lala, the anthropomorphic bear. A flashback revealed that she’s always been a sentient bear, even before Sidonia started genetically altering humans. Since it’s never explained in the anime, Lala just seems really out of place.

The characters in this show aren’t overused archetypes, but they aren’t very spectacular or memorable. One of the characters died about halfway through and I didn’t even notice until I looked up the show on Wikipedia. All this time I thought she and another character were one person and the one who died was a background character. I’d say the closest we ever get to a cliché is the typical glory-hog antagonist, Kunato. But what I did like is that he experiences severe remorse for selfish actions that ended up getting a teammate killed. My only complaint is that his pride was inflated to such levels that it’s hard to believe he would do what he did. 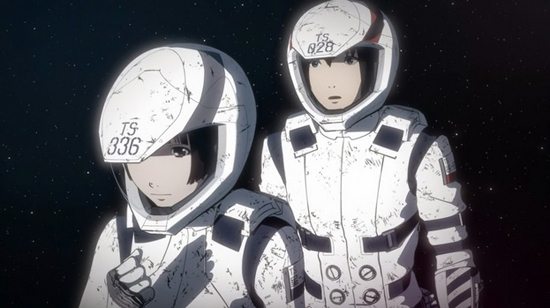 The show falls into a couple of traps that big anime fans have seen much too often, but they’re not as bad in this case. First of all is the obligatory fan-service. While there’s a scene or two where there’s really no logical reason for it to appear, it makes sense elsewhere. The people of Sidonia can photosynthesize, allowing them to subsist on one meal per week. In order to do this, they need to expose their skin to the sun. I would have been more comfortable with the semi-frequent nudity if the show had committed more to the justification behind it. Sidonia doesn’t seem any more comfortable with nudity than our own society and we never see any males photosynthesize. Also, Nagate at times seems to be the star of a harem anime, with several characters vying for his affection. However, there are understandable reasons for the girls to like him. He’s a star pilot, he’s somewhat exotic and he’s a genuinely nice person. It could have been much worse. Imagine Tenchi Muyo GXP in CGI.

While Knights of Sidonia doesn’t look like it will be one of my favorite shows, it intrigued me enough to follow through with the series and check out the manga. If you like science fiction and mech anime, then you should definitely give this a watch. Knights of Sidonia has been localized for Netflix and there is a second season in production.

Norbert Daniels Jr. digs giant robots. Read more of his writing at TheLateNightGamer.com and follow him on Twitter @norbert_dan.