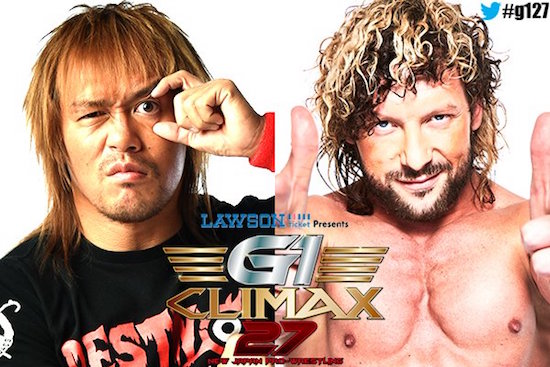 A sold out Ryogoku Sumo Hall played host to what were possibly the three greatest nights in G1 Climax history. Almost certainly the finest two. And most definitely the best one. 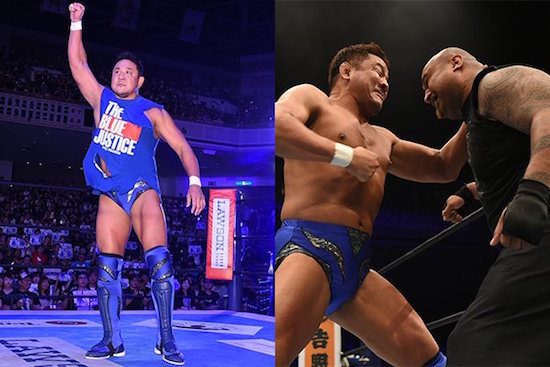 Fans held up “Final Match” signs for Nagata as he graced the G1 Climax stage for the last time. And tonight he played a greatest hits package of sorts alongside his former student, Fale. The kicks, an exploder, the armlock where his eyes roll into the back of his head, hell, even the Nagata Lock. If I had a lighter handy, I’d have held it high for that one.

But it was the Bad Luck Fall that closed this show. Thankfully, an encore was played: Fale stood across from Nagata, throwing up a Two-Sweet, to which Nagata gave his trademark salute. Fale responded with a bow, and exited the ring, leaving Nagata to bid the crowd an emotional farewell.

If you didn’t salute the screen with tears in your eyes, I don’t want to know you. 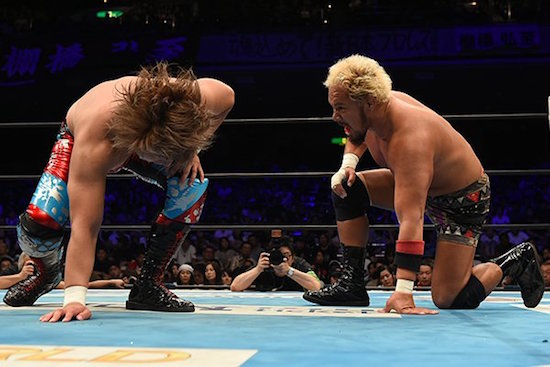 YOSHI-HASHI received a visit from the ghost of crispy-haired future in the form of Makabe and his arid scalp — his bleached blonde hair fried and thinning. The path on which YOSHI-HASHI’s thick, but parched, mane is surely headed. This worries me more than any neck drop ever will.

Earlier I had suggested that, perhaps, YOSHI-HASHI should consider a quality, yet affordable, leave-in conditioner. But I now realize that’s not enough. Unless he wishes to ride alongside Makabe on the road to ruin, YOSHI-HASHI must make a sharp U-turn, and race to the nearest salon for immediate professional hair care assistance.

On a semi-related note, Makabe pinned YOSHI-HASHI after a spider german suplex cleared a path for the King Kong knee drop. 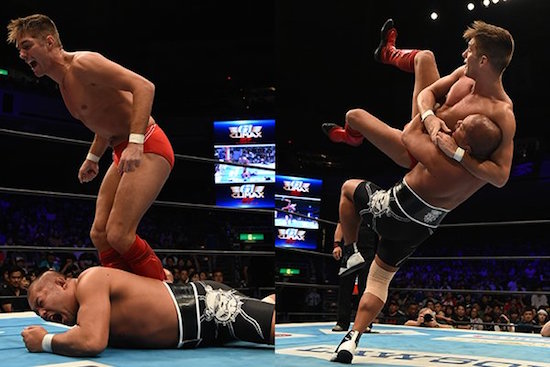 I’ve been tough on Sabre’s physique these past few weeks, as he resembles Ichabod Crane with a decent neck bridge. But the fact of the matter is, he’s built like me. Could it be that his matches bring to the surface a deep rooted sense of self-loathing? Or is he simply too damn skinny to be sharing a ring with real men like Tomohiro Ishii — with his ideal Mr. Potato Head body?

Or maybe I’m just upset that Ishii’s G1 ended this way, with Sabre catching a sliding lariat from Ishii, and wrapping up his arms and a leg in a real conundrum of a submission hold. One Ishii refused to tap from, but that forced the ref to call the match all the same. The record books may mark this as a “win” for Sabre, but it goes in my book as another example of the poor officiating that has plagued this tournament. 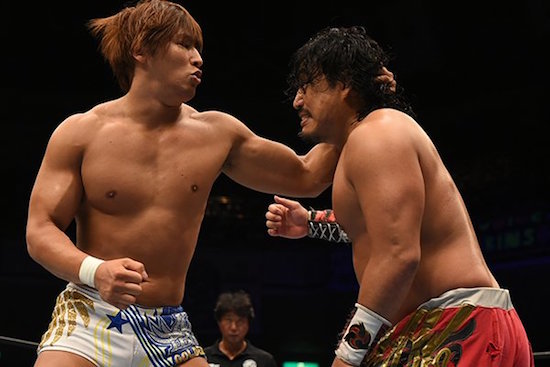 As always, Ibushi entered the ring equal parts homicidal and suicidal. Goto I feel is not as eager to die within the squared circle, but on the same token, I don’t think he’d complain much if that’s how things happened to go down. As a result, we were treated to a hard-hitting match between two men with little concern for their own or each others’ safety.

Ibushi went for the Kamigoye knee strike that has ended many a match this tournament, but instead of the sweet sounds of a cracking skull, he was met with a snarl from Goto. Ibushi then found himself taking a reverse GTR to the back of the shoulders, followed by a regular old GTR to the chest, before being pinned down for the three count.

Tetsuya Naito defeats Hiroshi Tanahashi to win the A Block 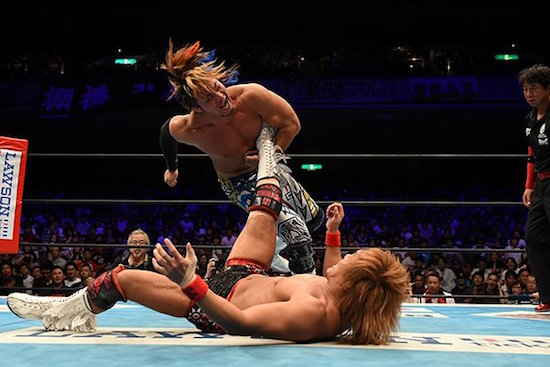 Like the Cameo song, this one was Back and Forth. To further quote Cameo: “you play, you’ll pay.” A philosophy Tanahashi accepted long ago, hence his insistence on competing with a torn bicep (and a myriad of other injuries). But in the game these two play, a hobbled Tanahashi is still one of the best around.

Am I going to stop quoting Cameo? No. That’s because when he sang that “Our love goes, back and forth” he could have been talking about the crowd inside Ryogoku Sumo Hall. Their alliances shifting with every big move and near fall, back and forth. But that pendulum could only swing for so long, and in the end it was Naito who became the A Block winner with a Destino. 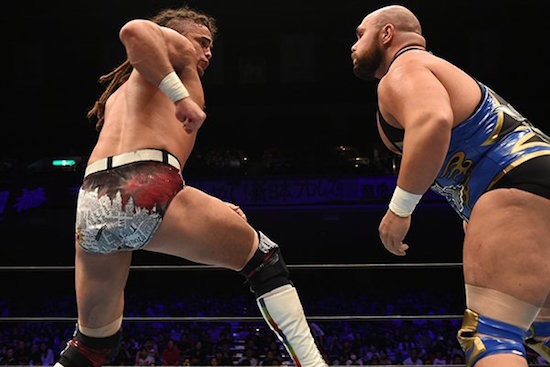 Juice had his little butt tattoo covered at the start, I hope he didn’t become self-conscious after reading one of my previous recaps. If that is the case, then I apologize for robbing you all of future butt tattoo.

Still, it did make one appearance in this match, when Elgin set Juice up for a powerbomb, giving him a wedgie in the process, and us the best look at Juice’s butt cheek adornment yet. And I suspect Elgin caught a glimpse as well, making him susceptible to the Pulp Friction Juice used to score the surprise victory. 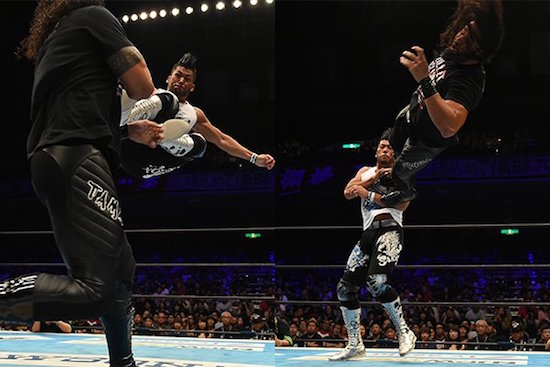 Right from the outset it was clear that something was off: yes, SANADA had trimmed his mohawk. A move that no doubt cost him what should have been a surefire win. No longer sky-high and tipping slightly to the side, his mohawk was now merely a normal-sized one. Therefore not enough to stop Tonga from hitting the Gun Stun and earning the pin, in this modern day retelling of Samson. 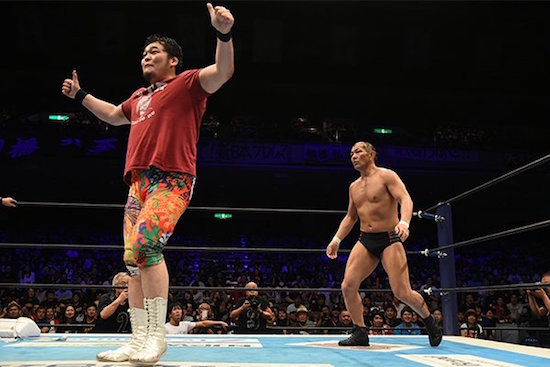 It was cheater versus cheater in a match that was, for me, the last straw. Now, I’d of course only call one of these two a cheater to their face, and that’s Toru Yano. I would call Minoru Suzuki whatever he wants, as long as he promised not to hurt me.

But this won’t stop me from telling you that this match was an affront to all who ask for nothing more than a clean, fair fight. An insult to those who view this as sport, rather than spectacle. Its many offenses included:

Post-match, Suzuki vented his frustrations on the young boys working ringside. My frustrations with Suzuki and Yano’s constant breaking of the rules, however, will be expressed in a sternly worded fax directed to NJPW’s front office. 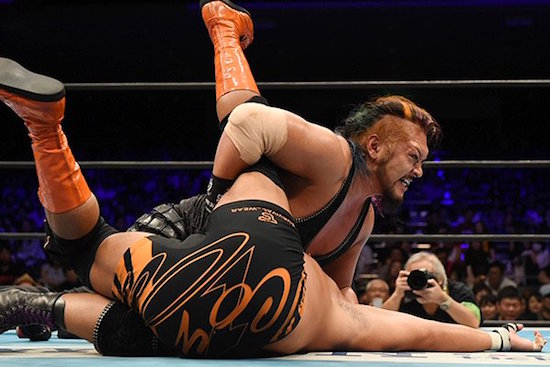 Like fellow veteran Yuji Nagata, Kojima may have failed to rack up the wins this G1, but he had his finest string of matches in ages. This trend continued against EVIL, as Kojima appeared to be a wrestler reborn before a headbutt, followed by an STO, gave EVIL the win.

Kenny Omega defeats Kazuchika Okada to win the B Block 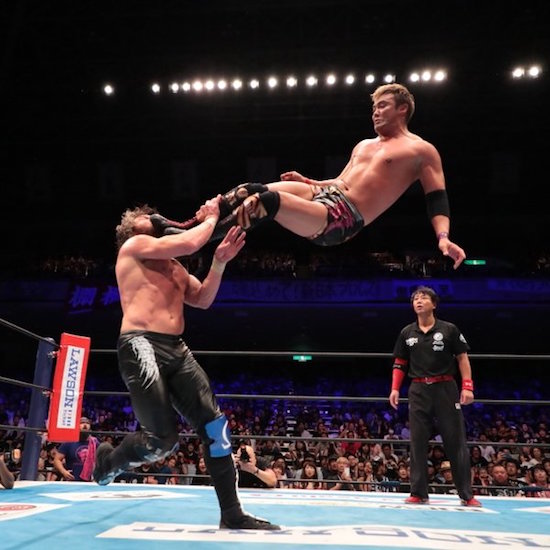 What is this grotesque pleasure we take in watching the systematic destruction of a perfect being? The story of Kazuchika Okada this year has been that of a man being chipped away, match after match. Us waiting to bear witness to the moment when he finally shatters. Legends have fallen attempting to do just that — Katsuyori Shibata’s career, and nearly his life, was ended delivering an ill-advised headbutt to Okada. And while EVIL managed to score a victory this tournament, it felt more like we saw a mere crack form in the marble, rather than the entire statue crumbling to dust.

On this night, Okada faced a man who had twice tried and failed to break him. Once in a 46-minute long epic, then again in a 60-minute endurance test that ended in a draw. I of course speak of Kenny Omega, an enigma that’s equal parts jester and death dealer. A wrestler with all the talent of Okada, but lacking the discipline. A trait that at times makes him difficult to take seriously, while also making him more dangerous than Okada could ever be.

With a 30-minute time limit hanging over the match, Omega turned this into a sprint. One where he delivered all the damage of their previous bouts, only at triple-speed. Okada had his moments, no doubt. But mostly we watched him suffer. The ref threatening to step in on two occasions, as well as the ringside physician. Yet despite this, he would not fall.

The clock ticking, desperation kicked in — Omega not wanting a repeat of their draw in Osaka. It was then that he countered a Rainmaker with the V-Trigger, then hoisted Okada up for a match ending One Winged Angel. Fitting as I feel as if we just witnessed the wings being clipped from one such celestial being.

Will he fly to the heavens once again, or is he now forced to walk the earth with the filthy and the diseased? Only time will tell, the one thing we know for sure is that for the second year in a row, Kenny Omega will be going to the G1 Climax finals. 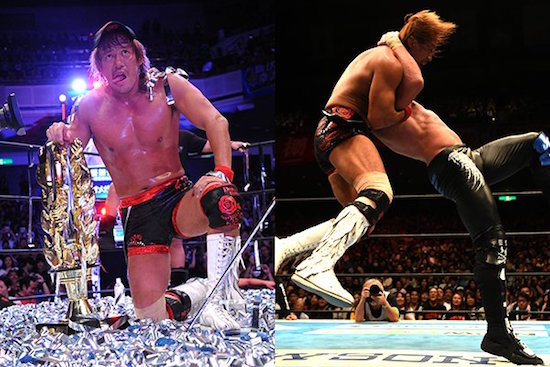 Sickening to some, the height of the art form to others. A sprawling tableau of masterfully executed chaos, not unlike Picasso’s Guernica. And like that piece, it holds the power to repulse, invite awe, spark debate, or possibly even drive the viewer into a frenzy.

The only blemishes I could spot on the canvas were some embarrassingly obnoxious white people sitting in the crowd. The much discussed botched piledriver that introduced Omega’s skull to the concrete being the kind of flaw that only makes the piece all the more striking.

The final brush stroke was a pair of Destinos, the second driving Omega’s head into the mat for the umpteenth time. After the pin was made, Naito laid lifeless, bleeding from the mouth, your 27th G1 Climax winner. A masterpiece.

A Vision of the Future 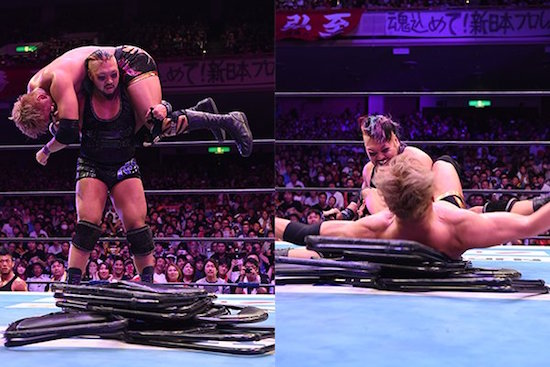 Multi-man tag action filled much of the preliminary card, and more or less cemented the future matches that have been hinted at throughout the tournament. EVIL will likely challenge Kazuchika Okada for the IWGP Heavyweight title this September, as will Zack Sabre Jr. for Hiroshi Tanahashi’s Intercontinental strap.

Meanwhile, look for Michael Elgin to go toe-to-toe with Minoru Suzuki for the NEVER Openweight Championship, and for Juice Robinson to attempt another shocking upset over Kenny Omega — this time with the U.S. IWGP belt on the line.

As for Naito, he’ll have to defend his newly earned briefcase once on the road to Wrestle Kingdom, and my money goes on that being against Bad Luck Fale.

I’ll see you again when I present the 1st Annual Otaku USA G1 Climax Awards, but for now here is the final tally of points.