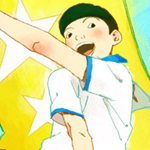 FUNimation announced a handful of shows for its spring 2014 anime lineup, including the likes of Dragonar Academy, selector infected WIXOSS, Daimidaler: Prince vs. Penguin Empire, new Fairy Tail, and more Puchim@s. The latest to join the lot is none other than Ping Pong: The Animation.

Despite having drastically different personalities, high school boys Peco and Smile have been friends since childhood. Now, they’re both talented members of a table tennis club—but what happens when these sports lovers have to go up against each other in tournaments? Prepare for truly epic matches in this new series from the director of The Tatami Galaxy!