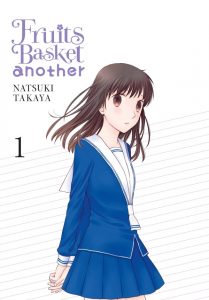 Like the spinoff Fruits Basket: The Three Musketeers, Another has been receiving simultaneous digital releases through Yen Press. Likewise, Yen Press picked up the original Fruits Basket manga after its initial American publisher, TOKYOPOP, went under. Fruits Basket is one of the most popular shojo manga of all time, and even if this spinoff has come to a close, it doesn’t mean there aren’t other outlets for your Fruits Basket cravings.

Here’s how publisher Yen Press sums up the manga:

Sawa Mitoma, a nervous, skittish girl who prefers minimal human contact, has just started high school, and it’s already not going well…until she meets the “it” boys-the “prince-like” Mutsuki and the sharp-tongued Hajime. But little does she know, they’re Sohmas!? It’s Fruits Basket…again!

Can You Withstand the Horror of This Haunted Toilet?
Time of Eve Director Reveals New Anime Film Sing a Bit of Harmony