“Wait,” you say, “is this a shojo review from the guy that’s normally waxing poetic over dudes beating each other up and other such manly manga madness?” Yes, it is; everyone needs a change of pace from time to time, okay? Now that the ever-so-suspect justification is out of the way, I can freely dive into Wataru Mizukami’s Four-Eyed Prince (Megani Oji), which follows the story of a somewhat, gosh, I don’t even know how to properly describe the protagonist, Sachiko. She’s not a ditz, but she’s also not exactly an inspiring role model, either.

Sachiko’s dilemma is a hardcore crush on Akihiko, an ice-cold glasses nerd known somewhat affectionately as the “Four-Eyed Prince.” She even goes so far as to profess her love to him, a bold move that ends in less than smashing results. Despite the rejection, Sachiko isn’t feeling completely defeated until the worst possible scenario occurs: she ends up having to live with him as his stepsister.

That would actually be the best possible scenario were this a smutty comic, but it’s not, so clear those dirty thoughts out of your mind before we continue.

He couldn’t care less about her, and is instantly dismissive, not approving of this new development at all. Just as things are at an emotional boiling point, Sachiko ends up trapped in the rain, and bumps into a handsome young bar employee named Akira. After being doted on a bit, she wonders why Akihiko can’t be more like this charming guy. As it turns out, he is, because Akira is simply one of two clashing personalities in Akihiko’s mysterious dual life.

So we’ve got a girl hopelessly in love with what appears to be the wrong guy, only to find that said guy actually becomes all Rachael Leigh Cook in She’s All That when he removes his glasses. Even girls in the background are rocked to their core when they see the suave Akira, but are quick to throw insults at the stiff, nerdy exterior of Akihiko. Of course, Sachiko sees something to like about both sides of this very disturbed individual, and eventually starts to see his true personality break through in the cracks and crevices of whatever facade is on display.

Personally, I don’t think either of his personalities, glasses on or off, are particularly endearing. This manga is, however, unapologetically for those with a fetish for glasses on their guys; there’s even a “Glasses News” section in the back of the volume, in which author Wataru Mizukami raises a question to herself. “What’s that you say? This is supposed to be a manga about glasses, but there weren’t enough scenes with glasses in them?” She goes on, naturally, to promise more glasses in coming chapters.

Four-Eyed Prince has the depth of a reader letter to Cosmo, but if that sounds like icing on the bespectacled cake, then this is going to be a sweet enough dessert for the younger female crowd. Everyone else may tire quickly of the manga equivalent of picking petals off a flower in abusively rapid succession. “He loves me, he loves me not, he’s a jerk, he’s totally sweet.” The unrelated bonus story that follows the opening chapters, “Mean Boy,” falls along the same lines, but keeps its disparate emotional beats within the confines of a short.

I’d like to think I’ve read enough shojo titles and seen enough anime within the genre over the years for you to take my word on the notion that Four-Eyed Prince is, in the least word-mincing way, a bearable story centered on borderline unbearable characters. Both it and to an even greater extent, “Mean Boy,” are so hot and cold that at times they almost come off as dramatic parody. However, let your love of glasses guide you for the greater good of four-eyed dorks worldwide. 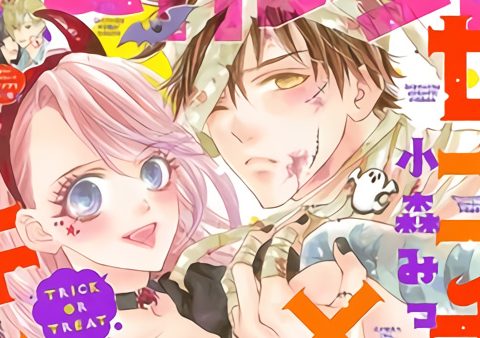 Demon Slayer Gets a Shojo Makeover in Margaret Magazine