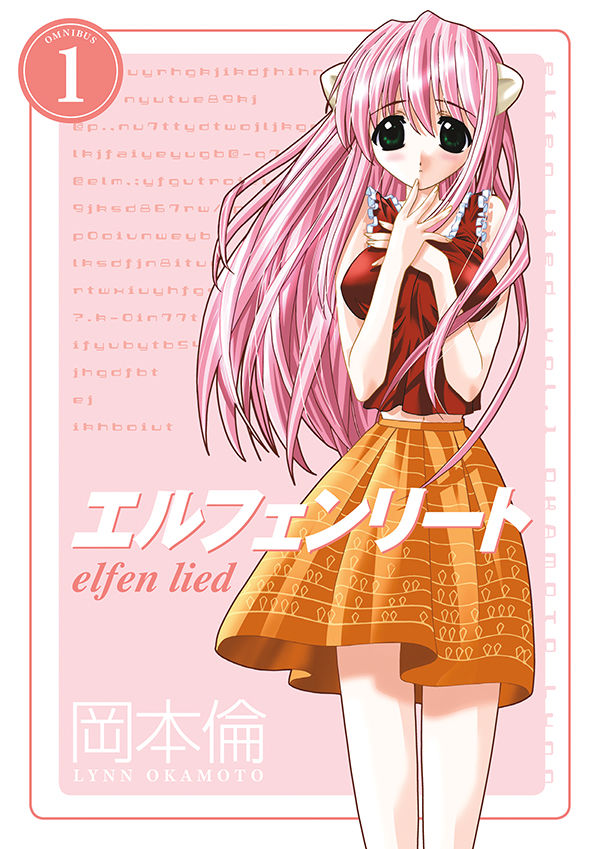 The Elfen Lied anime from Sentai Filmworks is a cult classic, infamous for its brutality and sexuality, while also loved for its strong plot, engaging characters and tragic, riveting storyline. Now Dark Horse is stepping in and giving us the long overdue Elfen Lied manga, years after many of us fans of the anime gave up hope for an English license.

Dark Horse is publishing the series in an omnibus format, so the first book actually has the first three volumes, plus three short stories originally published with these volumes. It follows the same story known to those who have seen the anime. Lucy, a mutant with horns on her head and the power to kill with invisible hands, is locked up in a hidden lab where mutants like herself suffer terrible science experiments. When she manages to break free, she’s shot in the back of the head, erasing memories and bringing out another, more delicate personality. She ends up being taken care of by Kouta and Yuka, college-aged cousins who haven’t seen each other after a tragedy occurred ten years ago. Yuka still remembers the tragedy, but Kouta has managed to block it out.

Lucy’s new friends name her Nyu, because that’s the only word she can now say. Before long they bring in another abused girl, Mayu, who escaped from a bad home life. But the lab, fearing how many people Lucy might kill, are searching for her everywhere. Kurama, the lab’s director, has Nana, another mutant forced into experiments, search for Lucy. The relationship between Kurama and Nana is especially gripping, because even though Nana is being held against her will and tortured, she latches on to Kurama as a father figure since it’s the only way she can handle this world. Kurama, meanwhile, comes across as an ambiguous figure. Here he is, part of this awful lab, yet you also see him showing kindness to Nana and trying to help her.

When it comes to Elfen Lied, the elephant in the room would be the amount of violence and nudity in it. And, yes, there’s plenty of both. You see bloody limbs flying through the air and the mutants are kept naked in the lab because their invisible arms can allow them to use anything as a deadly weapon, even clothing. But just being scandalized by these things misses the heart of Elfen Lied, and, yes, there is a heart to it. It’s a manga built upon tragedy, of the cruelty that people will do to other people. Nearly every character in the book has a traumatic past or has suffered some form of abuse. But it also shows people trying to come together in spite of tragedy. For a manga that has lots of shock value, it also has quite a bit of nuance and the characters are not always what they seem. This is a definite must for fans of the Elfen Lied anime, and kudos to Dark Horse for bringing this much-wanted manga to English-speaking readers.