Diligent readers that have already breezed through the latest issue of Otaku USA (it’s the one with those tough guys you may have heard of on the cover) are probably as well versed on the story of Dragon Ball GT as anyone at this point. They’re well aware of Goku’s Black Star Dragon Ball-powered transformation into a child at the hands of Emperor Pilaf; they know all about the intergalactic trip he sets off on with his granddaughter Pan, Trunks, and the ever-handy robot, Giru . That said, I’ll spare those readers any of the setup involved in Dragon Ball GT as I dig into the first season box set of this follow-up to one of the most popular shows in the history of anime.

Let’s get one thing clear right off the bat: Dragon Ball GT is a weird series. It suffers from multiple DB identity crises as it very transparently tries to appeal to a wide range of fans both new and old. Taking place ten years after the end of DBZ, it has that entire wild, blazing-fast fisticuffs world to contend with, one that’s changed a lot in the time since Buu was vanquished. GT also attempts to bring back the whimsical aspects of the original Dragon Ball, making for a mighty strange meal that’s equal parts Saiyan-shocked hair and goof troop intergalactic escapades.

No matter what letters come after the Dragon Ball, though, the series has always been about growing up, with characters actually changing over time, forming new relationships and alliances, and establishing their own lives in the midst of whatever world-shattering dilemma is occurring during that particular story arc. GT does an admirable job of following suit, showing a very different group of heroes that have all moved on as the series opens; some of them are working normal jobs, others are still training in case they have to fight the good fight again one day.

Of course, it may seem cheap to compare this directly to Dragon Ball when it’s all so in your face. I mean, Goku is reverted to a child and everything, so it’s not like it was some unconscious thematic decision to take the series in that direction once again. Fans with fight fatigue from 291 episodes of action in Z won’t exactly find a reprieve from it here, but there’s much more levity in place of the tough-as-nails throwdowns that previously spanned entire seasons. Their first major battle is with an obese giant that causes earthquakes with a flick of his whiskers; a far cry from reviving near-dead comrades with a soothing senzu bean in the shadow of an enemy that can wipe out a planet in the blink of an eye.
The first season

covers episodes 1-34, taking us from Goku, Trunks and Pan’s initial liftoff into space to a fairly lengthy battle with the harmlessly named Baby, who looks like some weird, tiny bionic hybrid of Buu and, um, most of the villains that preceded him in Z. The character design isn’t quite as imaginative without Akira Toriyama’s touch, but the situations are anything but dull and lifeless. Throughout their travels, Goku and friends end up assisting some enormous bees, dealing with a cult leader that transforms his followers into dolls to fuel an enormous false idol, and they eventually find themselves trapped on a planet full of machine mutants, where the evil Baby is revealed. It’s a journey without much pause, despite the fact that the majority of these events span a handful of episodes.
Perhaps the main advantage that GT holds is the catch that tends to turn everyone off in the first place: it’s far removed from the shadow of Toriyama’s Dragon Ball and Dragon Ball Z manga. For my money, reading both of those series was always the ultimate way to experience the story, no matter how much fun the animated action was. Thanks to the wonder of the comics medium, one could blaze through them at their own pace, without the hinderance of filler and drawn-out battles essentially created to kill time on screen. That’s not to say that

Toriyama’s original work was without flaw, but more factors play into the each individual’s enjoyment when they can control the rate at which it’s all processed.

GT doesn’t have the same established stories to adapt, making its best feature the fact that I don’t know what’s going to happen next. Even sitting at the bleeding edge of the 34th episode, I still don’t really know what’s waiting in the second season box set, which FUNimation just recently released. I’ll be sure to let you know what I find in that sinister package; in the meantime, don’t hesitate to give GT a crack just because of what you’ve been hearing over the years. It’s a different beast and, thirteen years after its Japanese television debut, it’s ready for a reevaluation. 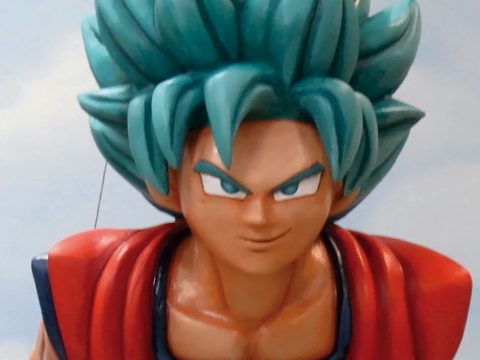 Goku Gets His Own Macy’s Thanksgiving Day Parade Balloon