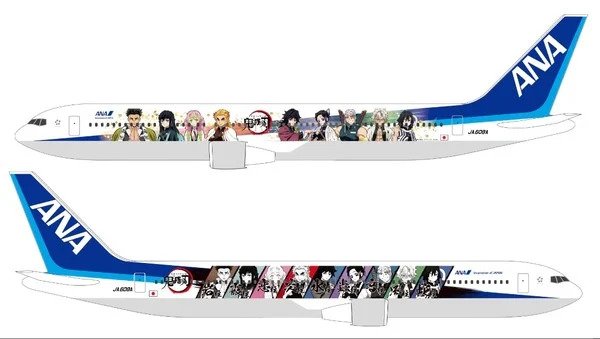 Much to the delight of otaku (or disappointment if you can’t be there), Japan likes to have some of its planes decorated and themed after pop culture references. So there are, for example, planes themed after Pikachu or Godzilla. A Demon Slayer themed plane first took to the skies last month, and the look of the second Demon Slayer plane has just been unveiled.

Both Demon Slayer planes come to us through a partnership between the anime and All Nippon Airways (a.k.a. ANA). The first plane, which is called Kimetsu no Yaiba Jet One, has images of Tanjiro, Nezuko, Inosuke and Zenitsu on its sides, plus a themed interior design, and flight voice-over from the characters’ actors. The new plane, Kimetsu no Yaiba Jet Two, is going to stick with the same interior and voice-over, but it’s redecorating the outside of the plane. Instead of the previous four characters, it has the nine Pillars. There are eighteen images in all, as each side has different pictures of the Pillars.

The plane will take to the skies on March 25 for sightseeing, and it will officially start taking passengers to their destinations on after that. It is only flying around Japan, so we won’t see it taking passengers to and from America. As an added nod to the franchise, they’re having Rengoku’s bento box from Mugen Train as an in-flight meal. There will also be extra Demon Slayer goodies, like Demon Slayer cups and menko cards. And the anime will be available to watch on the flight, just as the soundtrack is available to listen to.

Since Demon Slayer is one of the most successful manga and anime franchises ever, this is only part of a wide variety of Demon Slayer homages in Japan.