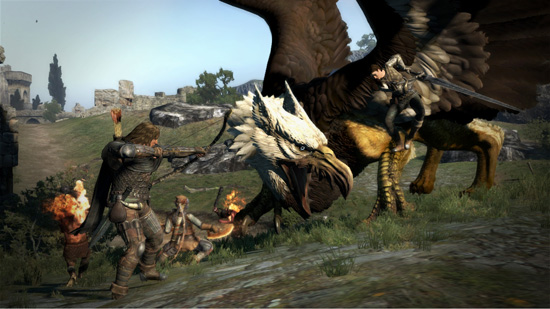 Thanks to titles like last year’s The Elder Scrolls V: Skyrim and The Witcher 2—the latter of which was recently ported to Xbox 360 to much continued acclaim—there’s no shortage of deep, lengthy Western-style RPG experiences for gamers to gorge on. While I’m one of those people who can appreciate the high quality of those games, I’m not the audience for them. It’s actually kind of a bummer, because I’d love to join in on the fun, but they’ve never clicked with me. That’s one of the reasons I found some foreboding in my growing anticipation for Capcom’s Dragon’s Dogma, which is, for all intents and purposes, a Japanese take on the Western style of role-playing, with some Monster Hunter influence dashed in for good measure.

Capcom has a lot riding on Dragon’s Dogma. It needs to succeed, and the retail version will even come packed with a code to download a demo for the October-dated Resident Evil 6. That brings me back to the days of Tobal no. 1, Square Enix’s PSOne fighter that was smartly packaged with a Final Fantasy VII demo. Even if Tobal wasn’t high on your list at the time, you wanted that demo. Clearly Capcom wants to make sure people have Dragon’s Dogma on their radars in more ways than one, but I don’t think they have too much to worry about. While brief, the demo that’s now up on Xbox Live and PlayStation Network more or less knocks it out of the park.

There are three things you can play around with here. Let’s get the least interesting, but still notable, feature out of the way first. It’s entirely possible you’ll spend as much time using the character creation tool as you will playing the provided quests. It’s not as meticulously slider happy as some other customizers out there, but players should be able to get reasonably close to crafting a character to their liking. It’s just a demo, though, right? It might be best to save the truly discerning, gotta-get-it-just-right creations for the game proper, but it’s nice to get a sampling of what can be done with it. 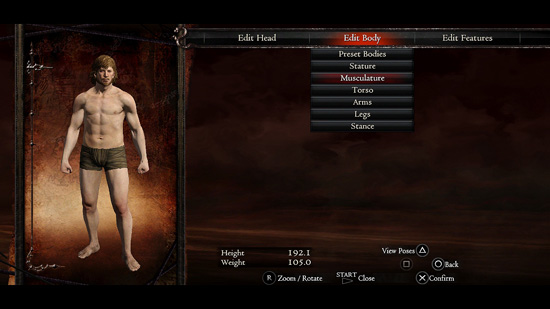 The real meat of the demo comes in the form of two sample quests, each featuring a different character class, capped with a unique large-scale monster to take down. The first is a prologue mission that puts you in a standard Fighter role. Armed with sword and shield, the quest takes you underground, where goblins cackle and harpies… harp. Helping you along the way are Pawns, computer-controlled characters that each have their own handy set of skills. Combat has a satisfyingly heft to it, even if it sometimes seems as if the Pawns are contributing more than your Fighter. You can command them in a few different ways, but they’re fairly autonomous and don’t require much real hand-holding.

The Pawns’ powers really come into play when it’s time to fight the Chimera, which pounces and hisses about a large catacomb, spraying poison from its snaky tail. It’s clear from the moment this encounter begins that this could be the real treat Dragon’s Dogma has to offer. Monster battles are genuinely exciting, and thanks to controls that appear more complex on paper than they are in action, it doesn’t take long to get the hang of running around the environment and raining hell on them along with the rest of your party. The best part, though, is the ability to grab and climb on any portion of a monster. Jump onto the Chimera’s back and stab away like it’s a small-scale Shadow of the Colossus foe; hack its tail off and watch it take brutal damage all over along the way.

A better sampling of this comes in the second mission, which takes place in an open field and almost immediately pits your Strider’s bow and arrow against a swooping Griffin. As usual, the Pawns help immensely, perhaps a bit too much, but there’s little more exciting than having one of them toss you just high enough to get a grip on the beast’s feathers and take it down with some mid-air stabs. After setting its wings on fire with some well-placed flaming arrows, of course. 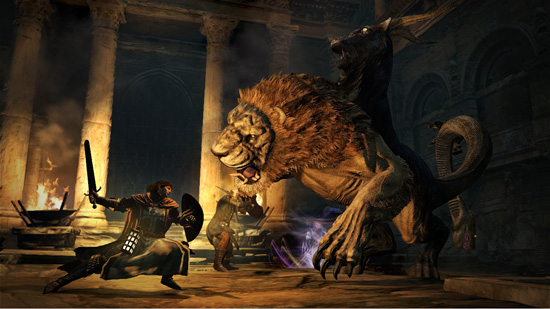 And just as quickly as it starts, the demo is over, but those wooed by its mechanics will likely revisit the battles a few times in coming days. I know I will. Some will also find this demo stingy, but it gets the job done. My concerns about Dragon’s Dogma have more or less been quieted, and I eagerly await the May 22 North American release. Still, while it certainly seems to fill the role of being a “single-player multiplayer” game, I can’t help but think how much better this would all be with three real-life players in place of the Pawns. The action just begs for online camaraderie, and I suspect that gaping hole will become even more evident when we have the final product in our consoles. That doesn’t do too much to temper the anticipation, though. If Dragon’s Dogma lives up to what its demo promises, Capcom just might have another hit on its hands. At the very least this is going to be an interesting look at Western RPGs through the lens of creatives behind the likes of the Resident Evil and Devil May Cry series.