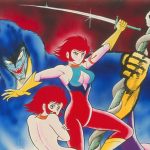 In addition to Devilman crybaby and Mazinger Z: Infinity, the 50th anniversary Go Nagai anime projects will continue with the newly-revealed Cutie Honey Universe. The project is being produced over at Production Reed (In Another World With My Smartphone), and it’s currently set to come out sometime in 2018.