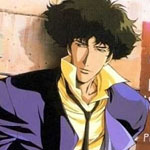 FUNimation had a handful of announcements to make, with plenty of license pickups at this weekend’s Otakon convention, from Haruhi Suzumiya to Lucky Star and more. Fans of Shinichiro Watanabe’s beloved Cowboy Bebop anime will definitely get a kick out of one announcement in particular, which has the show’s Blu-ray and DVD release slated for this December in North America.

In addition to DVD and standard Blu-ray, Cowboy Bebop will be available via Amazon and FUNimation.com premium Blu-ray/DVD editions, each with different packaging and premium items. We’ll have to wait to find out more on those, but for now you can mark your calendars and set aside some money for the end of the year.