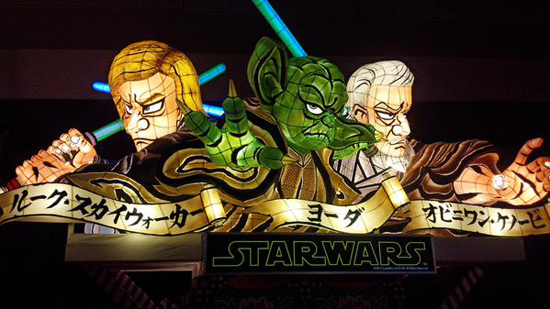 Aomori, a city in the Tohoku region of northern Japan, is well-known for its Nebuta Festival, where giant, brightly-lit floats depicting traditional northern warriors are paradied through the city.

This year’s festival was to have a special twist: in anticipation of The Force Awakens, it would feature floats based on Star Wars.

However, the floats were ultimately banned from the parade. Despite being announced in July, the organizers eventually refused to let the floats go through the city for two reasons: one, they weren’t traditional enough, and two, they might attract too many people, causing a safety hazard.

Instead, the floats were displayed the night before the festival officially got underway.

Whose side are you on – decades of tradition or R2-D2?

View all posts by Matt Schley
Toonami Promotes Akame ga Kill! Anime
New Trailer for Crowdfunded In This Corner of the World Film