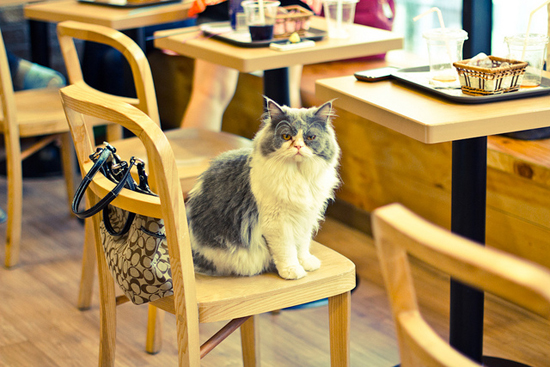 Cat cafes — literally cafes with cats walking around for you to hang out with while drinking your tea or coffee — might be one of the greatest ideas of the 21st century. They’ve been around for a while in Japan, and have slowly started to show up in other Pretty Cool countries like England, France and South Korea.

But not the US of A. No, we’ve got too much red tape to go through, apparently. It’s not okay to have animals in restaurants, or something. That’s a bunch of baloney, if you ask me, but I’m not in charge of these things. So far, though, pesky regulations have already (tentatively) prevented a cat cafe from opening in Boston.

Things might finally be turning around, though, as a pair of cat cafes are looking to open their doors in San Francisco this year.

First up is KitTea, which cat enthusiasts Courtney Hatt, David Braginksy, and Benjamin Stingle are looking to open this year after clearing a few regulatory hurdles. To get around local laws prohibiting animals in food facilities, they plan to separate the food preparation area from the cat zone with a long hallway, allowing customers to enjoy the best of both worlds.

The other cat cafe in the making is Oakland’s Cat Town Cafe & Adoption Center, which is looking to combine a cat shelter and cafe to create something that’s not quite a cat shelter, not quite a cafe, but somewhere delightfully in the middle. Founders Ann Dunn & Adam Myatt are currently holding an Indiegogo campaign to raise money for the cafe conversion.