SHARE
Before we get into the review, which appears in the latest issue of Otaku USA magazine, we have some bonus content! As promised, here’s some hands-on Attack on Titan action from the OTAKU USA PLAYS series!

When you have a series that already has its own “mechanics” like Hajime Isayama‘s Attack on Titan, it pretty much has to be made into a game at some point. Unfortunately that’s easier said than done, which is something we all discovered with the release of 2013’s Attack on Titan: Humanity in Chains on Nintendo 3DS. While the version we got in the West was the updated CHAIN release, a kind of janky portable outing didn’t exactly capture the spirit of the original manga or its wildly popular WIT Studio anime adaptation. Thus, Omega Force’s Attack on Titan needed to deliver.

Those who follow games closely know Omega Force as the developer behind the Dynasty Warriors series and all of its many sub-series, from One Piece: Pirate Warriors to the upcoming Berserk and the Band of the Hawk. Attack on Titan offers something of a unique challenge for them, though, because it’s not exactly conducive to the mob-managing, crowd-battling action of the main Warriors games. Instead the enemies at hand are Titans of all sizes, from the little nasty ones that aren’t much taller than humans and look like someone’s deranged little cousin to the biggest beast of all, the Colossal Titan. The threat is real, and it’s portrayed to be as deadly as ever in Omega Force’s action game. 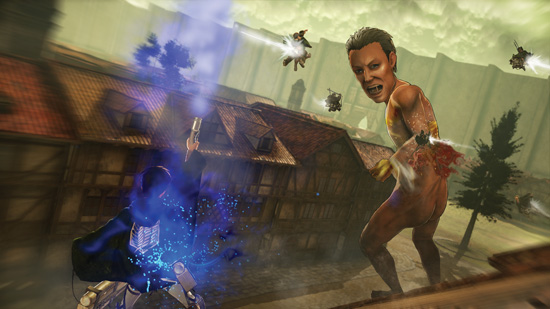 Since we’re fighting Titans, we naturally have to get used to zipping through the air with 3D Maneuver Gear. This tables the toughest test of turning Titan into a tremendous television game, because, well, controls for something like this can get a little messy. It’s like trying to zip around New York City as Spider-Man, except he also has a sword, and he actually has two lines of webbing out at all times, and he has to stick them to anchor points on The Vulture and can only attack the nape of his wrinkly old neck. This is a make or break feature, and Omega Force does a great job of capturing the feeling of propelling above and across the environments at breakneck speed. When you finally land that killer blow on a menacing Titan, it’s exactly as satisfying as it should be.

That’s not to say there aren’t a few dozen awkward first steps along the way. The first handful of missions won’t be pretty. I wrestled with the controls for a while, trying to remember which button locked onto the Titan, and which buttons shot out my line, pulled me in closer, delivered the killing blow, and got me out of there before his nearby buddy could swoop me up for a quick meal. The opening hours will likely consist of some major finger-fumbling, but it does eventually click. Once I got the hang of it, the pendulum rapidly swung the other way. Next thing I knew I was dominating the missions, speedily and handily taking down Titans with a single cut. I don’t think I bothered targeting anything other than the weak point of the nape after that, making the experience much easier but no less fun than before. 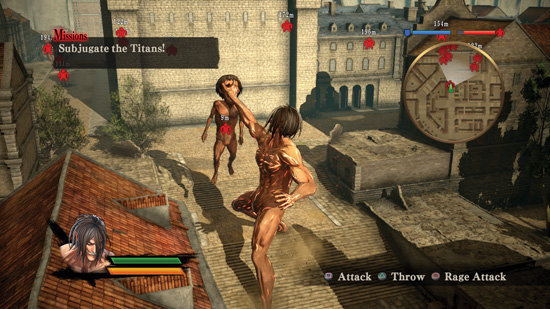 The story is exactly what you expect, faithfully retelling the anime with the same Japanese voice cast. At some points I found it more exciting than the anime, actually, and it’s a fine way to soak in the narrative. The CG-animated sequences look great, and even the in-engine cutscenes are well-directed, with plenty of the angst and drama we’re all familiar with. Those who can’t wait until spring 2017 for the second season of the anime will also dig the fact that the game goes a bit beyond the events portrayed in the first.

There’s plenty to do in Attack on Titan, and the main story alone should keep you busy for a while. In addition to the story missions there are a bunch that involve surveying each area, so you can take on these micro-missions whenever you don’t feel like committing to the sometimes lengthy story chapters that comprise the campaign. In true Warriors fashion the action does get repetitive at times, but I found the Titan-toppling pretty enjoyable throughout. Attack on Titan fans won’t want to skip this game, and it’s not a bad way to discover the series for anyone who feels like picking up a really weird action game.