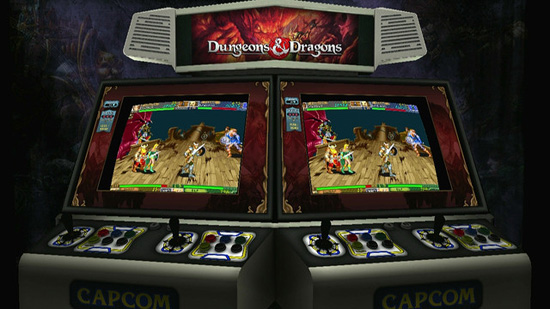 In the new issue of Otaku USA magazine, we review Vanillaware’s PlayStation 3 and PS Vita beat ’em up Dragon’s Crown. The busty Sorceress and the rest of the characters may have sprung from the pen of artist George Kamitani, but the design is a pure homage to genre entries from the past, especially Capcom’s own spin on the world of Dungeons & Dragons. 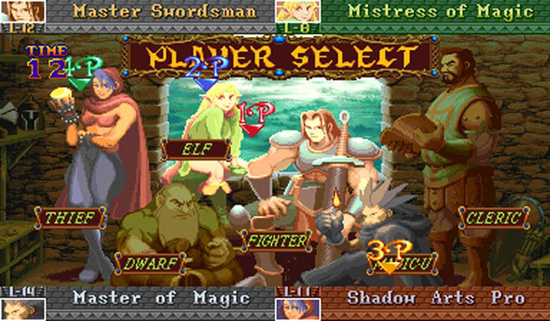 Capcom was absolutely killin’ it in the ’90s when it came to arcade brawlers. The midpoint of the decade saw two of its best arrive in the form of 1993’s Dungeons & Dragons: Tower of Doom and 1996’s Dungeons & Dragons: Shadow over Mystara, but not everyone was able to experience them when they were still pipin’ hot. Those who didn’t get a chance to crunch quarters in a sticky-floored arcade had to resort to importing the console version, which hit Sega Saturn exclusively in Japan. It was certainly worth the price at the time, but it’s a shame more people didn’t get to generate those fond memories of lovingly rendered fantasy sprites and traditionally structured side-scrolling action with a twist.

That’s one of the reasons it’s so great to be a fan of gaming today. Thanks to the ease of digital distribution, Capcom was finally able to bring these classics back in a bundle called Dungeons & Dragons: Chronicles of Mystara. What once would have been more of wallet-straining investment can now be purchased on Xbox Live Arcade, PlayStation Network, Steam, and the Nintendo Wii U eShop for a pleasantly reasonable $14.99. If you’re a fan of the genre it’s worth every penny, even if the somewhat dated approach to vacuuming money from the pockets of arcade-goers is more transparent than ever. 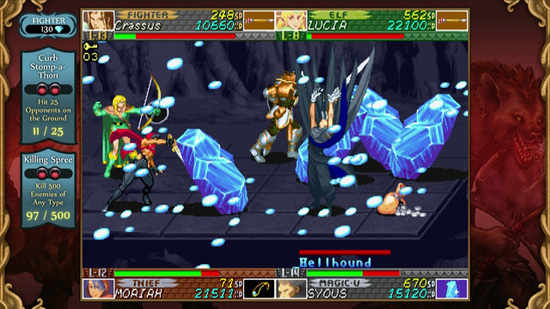 Yes, the Dungeons & Dragons arcade games can be cheap. There’s little in the way of actual satisfaction when it comes to playing through them from beginning to end. In fact, now more than ever they can just be plain exhausting. I had to chalk some of this up to how much I wore them out on Saturn, though, so individual mileage will no doubt vary. Whether you’ve never played them or jammed them a hundred times, however, hacking away at some of the later bosses and continually popping in virtual quarters eventually drains even the greatest amount of sword-thrusting medieval enthusiasm.

If they can be such a slog, why even recommend giving these games a shot? While it’s true that the Dungeons & Dragons games kept one foot in older, more intentionally devious arcade mechanics, they also ushered in more RPG-like elements, the influence of which can be seen in successors like Guardian Heroes, Code of Princess, and the aforementioned Dragon’s Crown. Combat also differs refreshingly depending on which class you choose to play as. Going through the game as a Fighter, for instance, is different enough from playing as the Elf to warrant jumping in from the beginning as something else. 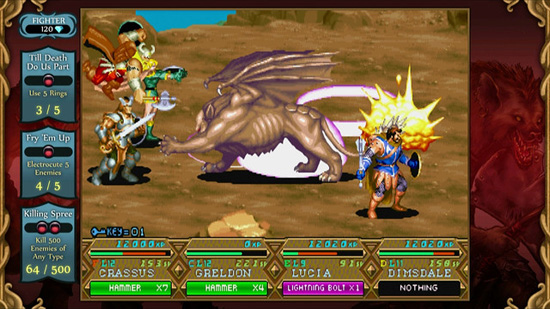 While the formula is present in Tower of Doom, the Chronicles of Mystara collection defaults to Shadow over Mystara for a reason. It greatly improves on everything Tower established, adding the Magic User and Thief classes to the mix for an even better multiplayer experience. That’s where these games really shine anyway, isn’t it? Playing with friends isn’t exactly a must, but it’s pretty close. With options for both local and online multiplayer—which only suffers from slight slowdown from time to time—there should always be someone to blaze through both games with, at least while they’re still warm.

Dungeons & Dragons: Chronicles of Mystara is a solid package overall, providing nostalgia for some and a genuinely fun beat ’em up experience for newcomers. There are also plenty of bonuses here, from extra settings and modes to HD filters that attempt to spruce up the graphics. Okay, it actually makes the game way uglier in my opinion, but at least it’s there for those who want it. While not everything holds up to the test of time, Chronicles of Mystara is more than a simple history lesson, and remains an example of ways the genre can be expanded and innovated beyond simply moving to the right and beating ’em all up.

5 Centimeters per Second
An Introduction to Cosplay USA