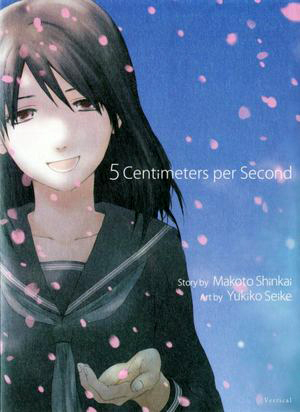 Makoto Shinkai’s anime has a very distinct feel to it, from the first work that really got his name noticed, 2002’s Voices of a Distant Star, to 2011’s Children Who Chase Lost Voices. Most of this comes from both his personal visual touch to his often muted, yet still emotional style of storytelling, so it was interesting to take a look at Vertical’s release of the 5 Centimeters per Second manga to see how that carried over to a different medium.

Surprisingly, a good deal of Shinkai’s spirit remains intact. Complemented by some nice artwork by Yukiko Seike, 5 Centimeters per Second retains a quiet, lyrical air as it gradually weaves a decades-spanning story of strong, youthful romance and how it can ripple and shred its way through adulthood. Such is the tale of Takaki Tohno, who develops feelings for Akari Shinohara shortly after she transfers to his school. In a time without cellphones spread amongst every child who can speak, the two are eventually separated by a substantial enough distance to warrant communicating via letters, and that distance is about to grow even farther. With Tohno about to transfer to an island hours away by plane, the two get together one last time on a stark white snowy night, and it’s one neither will ever forget.

As is often the case with life itself, promises to keep up communication eventually dissipate, but feelings linger no matter how deeply buried. Like the film, the 5 Centimeters per Second manga is split into different parts, and the second finds Tohno in the sights of a new girl, though she can tell some implacable feelings hold him back despite his external kindness. This portion of the book really focuses on Sumida, while Tohno shifts from being the protagonist, and is for all intents and purposes the object of this story. However much she pines for this object, though, Sumida only manages to hurt herself more and more as her affection grows.

There are uplifting moments in 5 Centimeters per Second just as there are moments that are truly crushing. After the second leg of the journey, we really start to see the effect Tohno has on others, and it stacks on him as he grows and life and relationships become more complex. Like Shinkai’s original work, the manga does a fine job of illustrating how something from deep in the past can echo throughout one’s entire life.

Following a first part premiere on Yahoo! Japan, 5 Centimeters per Second debuted theatrically in its entirety in 2007. Yukiko Seike’s manga adaptation launched in the July, 2010 issue of Kodansha’s Monthly Afternoon magazine, and was eventually collected in two volumes. Vertical’s release puts two into one, totaling at just over 450 pages, complete with a color opener. The pacing is such that one can almost hear the serene sounds of the ocean and countryside during the more poetic beats, and it’s a relaxing read despite some major downer moments. Those fond of the film will no doubt enjoy experiencing it in a new format.